Rivers of the Czech Republic 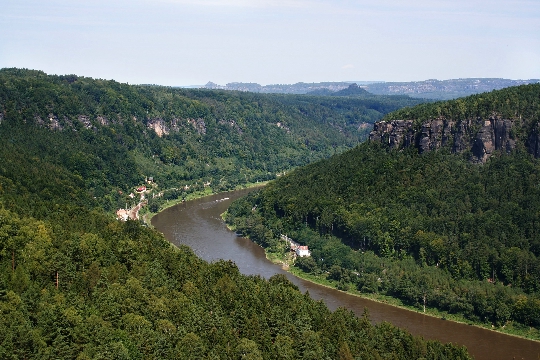 Czech rivers are quite numerous, but the length can not boast. The longest river of the country is the Vltava, which is the total length of 450 kilometers.

The source of the river - the Šumava mountains and flow of water in the VltavaElbe. The name of the Vltava River gave the ancient Germans, who called the river Wilth-ahwa. The literal translation sounds like "Wild water". Probably, once the Vltava and was so, but today - it's part of the beauty of Prague. The bed of the river runs through the urban area. In some places the track is blocked by dams. And the most popular tourist routes in Prague associated with the river. During the walk you can admire the Charles Bridge, see the sights of Mala Strana and Hradcany. On the banks of the Vltava River there are many interesting places, but with the water they are visually perceived quite differently.

The total length of the river just 65 kilometers. The source of Teplá is situated in the town of Eger (380 meters above sea level), and it flows into the waters of the river Ohře.

The spa town of Karlovy Vary is located on bothbanks of the river. The name of the heat gained by the fact that the water in the river never freezes. Water by heat have a peculiar odor that the locals explain available here thermal springs. Hence, apparently, fever and river water.

The total length of the river bed a little more than 164kilometers. Jizera - a right tributary of the Elbe. The source of the river is located in Poland (close to the Czech border). It passes the river on the north-eastern part of the country. Part of the river channel runs along the state border with Poland.

The bed of the river passes through the mountainous partterritory of the same name - the Jizera Mountains. And cutting down indigenous forests has led to the fact that during the heavy rains the river rises rapidly, but also fast and shallower.

The river will be interesting to fans of kayaking. But newcomers have nothing to do here, because the track is considered to be difficult.

The river belongs to two countries - Austria and the Czech Republic. But the main part of the course (153 kilometers) of the total 208 kilometers is being held on Czech soil. Lužnice - one of the tributaries of the Vltava.

The source of the river is located in the territory of Austria (Reyhelberg mountainside). Lužnice on its way to the Vltava several times crosses the border countries that find themselves in one state or the other.

Its unusual name of the river was in 1179. Literally, its name can be translated as "water flowing through the meadows."

Water Lužnice - one of the most popular places inlovers of water tourism. On the banks of the river there are many well-equipped sailing bases, as well as the picturesque ruins of the medieval knights' castles, surrounded by forests.

Austrian Flag photo, history, the value of the state flowers ...

Things to do in Yekaterinburg? What to do and ...