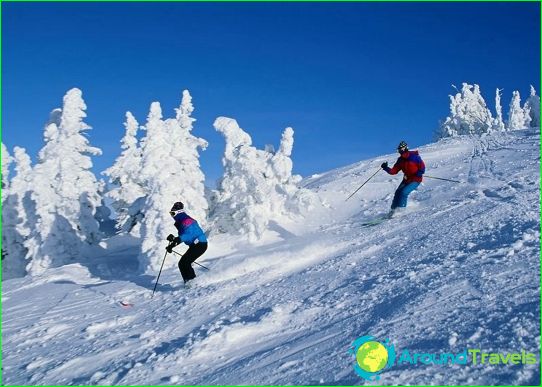 Despite the lack-mnogotysyachnikov peaksCzech Republic every year becomes a place of pilgrimage for lovers of the winter outdoor activities. The country is surrounded by mountains, in which there are more than 200 ski resorts, so the Czech Republic can be rightfully called a perfect place to spend a winter holiday or vacation.
Nearly 450 kilometers of ski andsnowboarding and downhill slopes in the country will help to show the athletic ability and professionals, and green for beginners. By the way, the ability of many family-friendly oriented Czech ski area. There are open not only to the school for the kids and those who are just learning to ride, but also equipped with the parks, which delivers to a place of rolling conveyor belt, and the ski carousel to help kids overcome fear of the first descent.
Czech is very compact, and all sightseeingfacilities here in the literal sense - within walking distance. That is why sports program can be successfully combined with sightseeing and tasting. After all, the best beer in the world and the winter has not been canceled!

The resort is Spindleruv Mlyn

The largest and most famous Czech skiThe resort is located just two hours drive from the capital airport. The season starts at the beginning of winter and lasts until early April. It offers - two ski areas. At Mount St. Peter is located 11 runs, among which and trails for beginners. Here prefer to ride and boarders. The total length of trails in St. Peter - 13 km, and almost all of them artificially lighted in the evening. Queues at the lifts is not observed, since their capacity - up to 9 thousand people per hour.
Dosochnikov can hone your skills on the ramps andtrampoline, which is quite well made. A ski school and equipment hire help for those who first came to the mountains, to decide what stand: on skis or on a snowboard.
Start of the second ski area Medvedin descent,It lies at a height of about one kilometer. There are only seven tracks, one of which is marked in black. Dosochnikov can take advantage of descents, designed just for them, and the cable car and seven lifts allow you to move up fast enough.

The largest ski resort is located on a slopemountains with typical Czech unpronounceable name - Smrk. Its height above sea level, just under 550 meters. The resort has two ski areas are accessible - Studenov and Lysa Hora. The first zone has in its arsenal a lot of green runs and honored newcomers, married couples with children, and very adult skiers. Snowboarders also hang out in Studenova zone, because it is here equipped with a snow park.
The second ski area is located on the resortslopes of Bald Mountain on the south side. It offers 14 km of trails, which are marked predominantly blue. Almost all of the slopes are equipped with snow cannons in case of Czech vagaries of weather. Season at the resort, as well as in most parts of the country, and lasts from December until late April.

Located on the northern slope of Mount Ještěd,whose height is little more than a kilometer, the resort is characterized by particularly strong snow with the onset of winter and the end of April. 13 Liberec skating trails offer intermediate level athletes and pros, since half of them - red, and a fifth - black. 10 modern ski lifts serve per hour about 10 thousand. Man, so that any temporary inconvenience resort guests do not experience even during peak hours.
The lower slope than child zonesnowpark equipped with rails and Trump. Here are three ski jumps and slopes for downhill training. In the evening, all this wealth lit and adjusts to the romantic pokatushki. When the skis and boards are resting, their owners go to the Liberec town on whose territory there are two unique attractions: the Botanical Garden and the Bohemian Zoo.
For skiing may best buy ski passes for all the holidays. For example, a one-day pass to the ski area will cost about $ 25, while the week - about 140.

This resort is spread out in the valley in the mountain rangeKrkonoše and it is surrounded by just three fairly high mountains. Eight local trails specially laid for a very scenic and leads skiers to the waterfall, then to the sources of the Elbe River.
The ski area in the resort lies at an altitude of approximatelykilometer and down to the level of 650 meters. Snow cannons provide confident cover throughout the season. Trails are quite complex, are including red and black markings, and therefore suitable only for professionals. 15 lifts deliver skiers and boarders to the starting point of riding.
In Harrachov and equipped fun park, with the opening ofwhich no doubt will enjoy the resort even more popular with dosochnikov. In the meantime, all the athletes are attracting not only the track, but well developed network of hotels, restaurants and leisure centers.

Christmas in Canada, traditions, photo. As the ...