Small towns in the Czech Republic 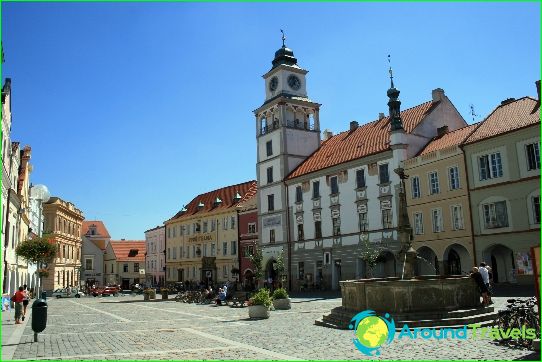 In the Czech Republic the average Russian touristusually goes for two reasons: to wander through the charming, medieval preserve the unique flavor of Prague and treat an exhausted body back-breaking labor office in the healing springs of Karlovy Vary. But advanced travelers prefer any country to know, from the inside and go for it in a small town in the Czech Republic. They provide a special provincial atmosphere, and for the sake of it, you can leave for a couple of days and the benefits of civilization, and the metropolitan surroundings. In addition, each town has its own special attractions and memorable places, which even on a European scale look quite respectable and dignified.

Among the small towns in the Czech Republic there are severalPlaces where there are attractions-champions. For example in the town of Olomouc in Moravia, there is a Plague Column, which is the height of luxury in addition to the areas and Baroque fountains in honor of the Roman gods - a record of all such facilities in Europe. Plague Column erected in the Old World in the Middle Ages in gratitude for deliverance from epidemics and dedicated to the Virgin Mary. In a small Olomouc Plague Column rises to 35 meters, and at the base chapel fit.
The highest Czech Gothic temple stands at allnot in Prague and in Pilsen. It is dedicated to St. Bartholomew, and its construction began in the XIII century. Temple Tower shot up into the sky at 102 meters, and for those who enjoy panoramic views, equipped with her observation deck.

According to the Czechs

Residents of the country are very fond of their history andhappy to travel to small towns in the Czech Republic. In their opinion, the most beautiful city where you want to certainly call - this Kromeriz in Moravia. The main attraction - the exquisite landscaping gardens Archdiocese at the castle, entered in the UNESCO World Heritage Site.
Parks and city Trebon castle - also on the listcompulsory to visit places they themselves Czechs. In addition to views of medieval castles where you can enjoy delicious meals of carp and decent beer from local breweries. Staunch teetotaler will like mineral water, curative Třeboň sources.

Taxis in Thessaloniki - price, order. How many ...