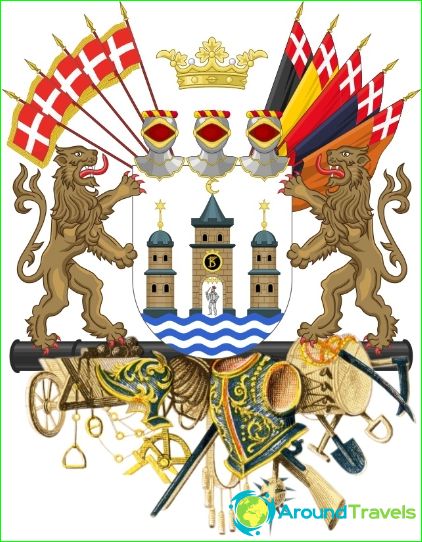 Copenhagen - the capital and largest city of Denmark, as well as one of the most beautiful and interesting cities in Europe with many different historical, cultural and architectural monuments.

Archaeological research has shown thata small settlement on the site of the modern Copenhagen existed at the turn of 10-11 centuries, and, quite possibly, was founded by Sven I Forkbeard. Officially, however, the date of Copenhagen's foundation is 1167, and its founder, Bishop of Roskilde (the ancient capital of Denmark) Absalon, who, being at that time as an adviser of King Valdemar I the Great received from the monarch's disposal to build and well strengthen the city on the east coast of the island of Zealand, in order to ensure control and protection of the Øresund Strait. So, under the leadership of Bishop Absalon on a small island Slotsholmen, Copenhagen became an outpost, a fortress was built.

Copenhagen grew quickly and developed and already in 1254He has received the status of a city and a number of privileges. Given the strategic location of the city and its "prospects", it is no wonder that Copenhagen is always included in the scope of the interests of the Hanseatic League, after the next attack which, in fact, in 1369, the city and the fortress Absalon was thoroughly destroyed. In 1397, in contrast to the Hanseatic League Denmark, Norway and Sweden have entered into a so-called Kalmar union in which Denmark took the leading position.

In 1410 on the site of the ruins of an old fortressthe construction of the castle, the walls of which already in 1416 housed the royal residence of Eric of Pomerania. In 1443 for Copenhagen was formalized the status of the capital. In 1448 in Copenhagen held the first ceremony of the coronation, and ascended to the throne of the dynasty founder Oldenborg Christian I. In 1479 Christian I founded the first university in Denmark - University of Copenhagen, which today is one of the oldest universities in Europe.

In 1536, the Reformation, the wave has reachedCopenhagen, which resulted in the fall of Catholicism and the formation of Lutheranism as the official religion of Denmark. After the excitement subsided, the city continued to grow and significantly expanded its trade relations. But the main transformation of the city began in 1588 with the accession to the throne of Christian IV (1588-1648). This period in the history of the town was marked by the construction of the Arsenal, exchange Bёrsen and observatory building (Round Tower), the base of the international trading of the Danish East India Company (1616), as well as such major projects as the Rosenborg Castle, the citadel Kastellet and Christianshavn district (the last two have been completed already successor Christian IV).

The 18th century brought the plague in Copenhagen (1711) andstrong fire (1728), in which it was destroyed about 30% of the city buildings. Unfortunately, part of an impressive medieval Copenhagen was lost forever. Restorative work and new projects substantially changed the architectural look of Copenhagen. Among the most interesting and ambitious urban planning decisions in Copenhagen in the 18th century can be distinguished building of the royal residence of Christiansborg and prestigious district Frederiksstaden, which today is considered one of the most outstanding complexes in the Rococo style in Europe. An important event for the city and was the opening in 1748, the Royal Danish Theatre. Serious damage caused fires Copenhagen 1794-1795 period.

It was a real bummer for Copenhagen and the beginning19th century. The famous sea battles in April 1801 between the English and Danish fleets, as well as the bombardment of Copenhagen in 1807 (which is a kind of pre-emptive strike of the British after the decision of Denmark to join the continental blockade, conducted by the French Emperor Napoleon against Britain), of course, had to the city a number of negative consequences. Denmark, up to this to remain neutral, it was embroiled in the Napoleonic wars in the framework of the Anglo-Dutch War, the end of which actually stood on the brink of financial and political collapse that affected accordingly and Copenhagen.

And yet, despite a number of disasters, 19th centuryHe went down in history under the name of "The Golden Age of Denmark", finding their reflection in art and architecture, and music, and literature. In the second half of the 19th century, Copenhagen has significantly expanded its borders, and has experienced a powerful wave of industrialization, to transform the city into the early 20th century, a major industrial and administrative center.

In World War I in compliance with Denmarkneutrality and Copenhagen through trade with both Britain and Germany flourished. During the Second World War the city was occupied by the Germans and suffered significant damage. Shortly after the war was developed in Copenhagen innovative development project known as Plan "Finger", which have already been launched in 1947.

Today Copenhagen - political, economic and cultural center of Denmark, one of the main financial centers in Northern Europe, as well as one of the richest and most expensive cities in the world.

Airport in Busan: diagram photo. How to get ...