Home>Articles about Denmark>Denmark Flag photo, history, the value of the state flag colors of Denmark

Denmark Flag photo, history, the value of the state flag colors of Denmark 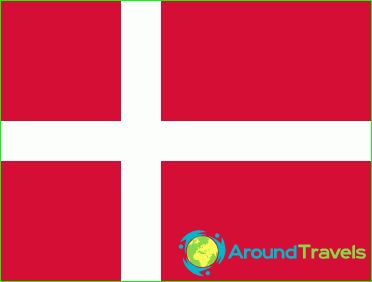 The cross on the flag uneven. Its middle portion is held in the middle of the web, and the vertical bar is shifted to the left. Cross Lines differ elongation, it turns out that they reach the edges of the flag. The cross is one of the main symbols of Christianity. It is noteworthy that this is the character first appeared in the Danish flag, and then gradually migrated as on state symbols in the other Nordic countries, including Iceland, Sweden, Norway, Finland, the Faroe Islands. Scarlet cloth national flag reminiscent of the power, heroism, courage, bravery, and valor, who were residents of the country manifested in attacks on their homeland, who have repeatedly happened in history. In these battles fell a lot of heroes, red blood that covered the earth, but the area remained independent.

The Danish flag is one of the oldest inworld. According to historians, the flag was used as early as the thirteenth century. At that time, there was a battle of Lindanise. Opposing sides in this battle were the Danes and Estonians. The Danes tried to dominate, but in the battle for a long time the odds were Estonians. Legend has it that it was in the most difficult period of fighting, when the strength and courage to have left the Danes and they were going to surrender to the enemy directly from heaven fallen flag. This is an amazing event occurred fifteenth June 1219. Since the flag came down from heaven, the people believed that it was sent to him by God himself, and gave the name of the web saying - Dannebrog.

Since ancient times the banner has become a symbolkingdom. Raising the flag is carried during the period of state and national holidays, as well as the fifteenth of June, the day of the birth of the flag, which has helped the Danes to win the hard fight.

There is another version, according to which the DanesWe borrowed the appearance of the flag at the banners the crusaders who have already used them in those days. Everyone decides for himself which version - more romantic or realistic to believe. It's not that, but the fact that the flag - has long been a symbol of the country that is familiar even to children.