Articles about Dominica
by aroundtravels 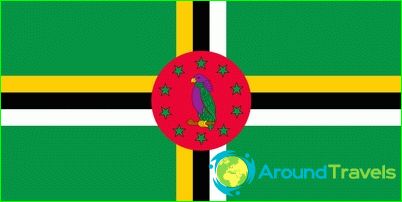 The national flag of the Commonwealth of Dominica was established in 1990. It is an essential symbol of state power island in the Caribbean Sea, along with its coat of arms and anthem.

Description and proportions of the flag of Dominica

Dominica Flag has a traditional rectangularand the most common form of the ratio of length and width taken in the symbolism of Independent States. The proportion of 2: 1. According to the law of the Commonwealth of Dominica, the flag can be used for all purposes on land and on water. It can lift and officials, and the public authorities and the citizens of Dominica. On the flag water use and commercial ships and private vessels. The flag is a sign of recognition for the armed forces and the state of the Navy.
The main color of the national flag of Dominica -dark green. The rectangle is divided horizontally and vertically three-reaching series thin stripes of yellow, black and white colors. The bands intersect exactly in the center of the flag, which they superimposed red disc circular shape. He placed the image of a parrot sisseru, which is found only on this island, and it is a national symbol. Bird ten five-pointed star surrounded by green, arranged in a circle.
Green flag Dominica flag symbolizes herluxury tropical vegetation and natural resources. The red disc in the center of - freedom and independence. The ten stars on the flag of Dominica - is its ten districts, and the cross - a symbol of the Holy Trinity. The colors of the bands correspond to the basic races living on the island: mulattos, blacks and Europeans.

The history of the flag of Dominica

The first version of the national flag of DominicaIt was officially adopted in 1978, when the country gained independence from the long-awaited British colonial rule. His panel differed from the current image of a bird in the red center of the disc. In the original version she looked in the direction of the free edges of the flag.
Then, in 1981, the green star on the red diskWe received a gold edging and the flag was re-adopted by the Government. The third change affected the image of a parrot - he was turned to the side of the shaft. This happened in 1988. The final version of the flag of Dominica approved in 1990, with gold rim star was removed, and the bird was left to look to the side of the shaft.

Shopping and shopping in Poland. What to buy, ...