Home>Articles on Egypt>Articles about Sharm el-Sheikh>Airport Sharm El Sheikh: diagram photo. How to get to the airport of Sharm El-Sheikh

Airport Sharm El Sheikh: diagram photo. How to get to the airport of Sharm El-Sheikh

Articles about Sharm el-Sheikh
by Meri 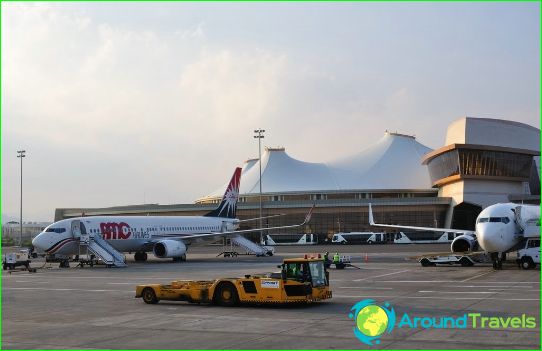 Airport Sharm El-Sheikh - the largestInternational Airport in the Sinai Peninsula, located in the southern part of it in the city. The level of service and comfort of the airport meets the requirements of modern life rhythm. It has two terminals for receiving and sending passengers, equipped with the latest technology and comply with international standards.
The first terminal, launched in 2007, serves mostly international flights. He shared two levels - for arriving and departing passengers.
There is always a relaxed and pleasant atmosphere without unnecessary queues and unnecessary fuss.

The airport was established in 1968 as a basethe Air Force of Israel. In 1978, after the summit in Camp David between Egypt and Israel signed an agreement on "principles of peace in the Middle East", the airport became the property of the Egyptian government. After minor renovation was used as a civilian airport.
Today, the airline is able to take anytypes of aircraft without limitation. The capacity of the airport, not counting turnover amounts to more than three million passengers per year. Debugged air communications with the CIS countries and the European Union, as well as the cities of continental Africa and the United States. Every day from here sent to international flights to more than 50, and directions.

From the airport in Sharm El Sheikh organizedtraffic reports from different, including remote, the resorts of the Sinai Peninsula. It constantly ply buses in such recreational areas as: Dahab, Nuweiba, Taba.
There is also provided a taxi travelers. Prices for transportation, as a rule, are added at the rate of one Egyptian pound per kilometer.

Things to do in Los Angeles? What to do and ...