Home>Articles on Egypt>Flag of Egypt: photo, history, the value of the state flag colors of Egypt

Flag of Egypt: photo, history, the value of the state flag colors of Egypt

Articles on Egypt
by Tori 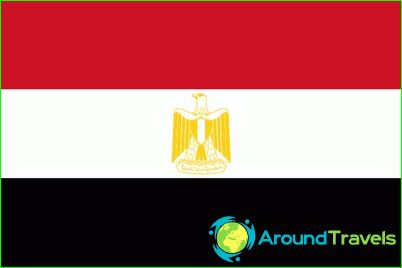 Egypt flag composed of three equal stripsarranged horizontally, in the colors: red, white and black. On the white stripe in the middle is the golden eagle of Saladin. The ratio of the width and length of the Flag - 2 to 3.
Officially proclaimed the flag at the end of the XX century. On land it is used as a state and the civil flag, the sea - as a civilian. The red bar is about the struggle of the people from the colonial yoke; White - symbolizes the uprising that took place in 1952; Black - the end of the colonial oppression of the British regime. Golden Eagle is a symbol of the Sultan Salah al-Din, who in the XII century, was the leader of the campaign against the Crusaders.
In the XVIII century, Egypt was under three yearsthe power of the French flag, because of the attacks on Egyptian soil Bonaparte. There is a struggle in Egypt and Turkey, but all the battles were unsuccessful. In 1882, the country came to the British troops. When the First World War, England separated from Egypt, Turkey and the country has strengthened its protectorate.
At the end of 1914 the Egyptian sultan flag was red in the left corner which settled three months within which were five-pointed stars. The red flag of the Sultan lasted 9 years.
In the first quarter of the XX century it was the first approvedflag belonging to the Arab Republic of Egypt, after obtaining freedom from Britain. The flag was green with a picture of a crescent on it, inside of which there were three stars. Flag Kingdom of Egypt lasted from the middle of the XX century.
Even then Egyptian president tooktricolor with stripes of black, white and red. The flag resembled the current version, but the great eagle, the middle of which is adorned with a green circle crescent, turned up, and three five-pointed stars arranged in the month was depicted in the center of the flag. Red stripes tint applied to military time, then there was a struggle against the British control of Egypt.
Eagle was later replaced by two green starswhich is located on the white strip with a uniform distance from the edge and between them. Flag declared symbol of the United Arab Republic. While united republic of Egypt and Syria.
In the period from 1972 to 1984, the pair of stars has been replaced by a golden falcon. And after this year, instead of a falcon on a white band appeared golden eagle.