Home>Articles on Estonia>Estonia Flag photo, history, the value of the state flag colors of Estonia

Estonia Flag photo, history, the value of the state flag colors of Estonia 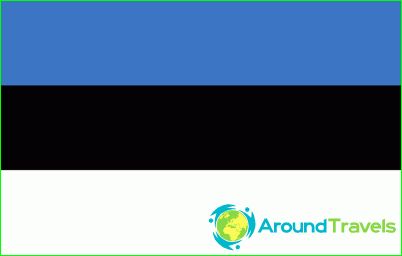 Colera Estonian national flag representidea. Estonians have always believed in a happy future for his people and sought to freedom. The flag consists of the following colors: blue, black and white, which was originally chosen for its young Estonian Student Union. Then, in 1881, young intellectuals believed that these colors reflect the dedication to the national idea and symbolize the Estonian people and the land.
The blue color represented the sky above the native land, itslakes and bays. Black, in this case, a symbol of loyalty to the homeland, despite the age-old ills and foreign rule, and the color of Estonian national costume. The white color reflects the faith and hard-working people in the pure human happiness, a decent life, a brighter future.
May 23 and the new style 4 June 1884blue-black-white flag was first consecrated pastor of a small parish Otepää. Until that time, Estonia has never had its own national flag. According to the unique metaphor tricolor colors reflect the entire history of the Estonian people: the blue people talking about independence in ancient times, black symbolizes the loss of freedom, and the white color has promised a return to self-sufficiency. People who have national dignity, always strive for independence.
Much of the history of the Estonian people blightedforeign invasions and seizure of power. Not surprisingly, the Estonian flag has a black stripe in the tricolor. In the 13th century crusaders forcibly incorporated into the Estonian land of their order, after the Livonian War, Sweden was considered the land of their Estonians. And when the Great Northern War Russia defeated Sweden, Estonia is turned to his province. In the late 19th century, when the idea was born in flag colors, Estonia, like the other Baltic states - Finland and Poland was ruled by the Russian tsar. Of course, while the Estonian patriots could not dream of sovereignty for their country.
Estonia led the National Liberation ArmyWar in 1918-1920. under the banner of the blue-black-and-white banner, considering that these are the best colors for the flag of independence. At the moment when the flag was hoisted above the highest of the towers of Tallinn, the tower, which has the name of Tall Hermann, it has become a symbol of independence for every Estonian and soaring on her national flag symbolized the power of free Estonian people. June 27, 1922 the Estonian Parliament approved the law of blue-black-and-white flag as the flag of an independent state.
When Estonia became one of the fifteen Sovietthe republics, the national flag was banned and the tower of Tall Hermann waving a red flag. Fifty years of blue-black-white flag was banned, but now Estonia - a sovereign state and is proud of its own flag and its history.

Where to go with children in Tel Aviv. Entertainment ...