Home>Articles about Ethiopia>Flag of Ethiopia: photos, history, the value of the state flag colors of Ethiopia

Flag of Ethiopia: photos, history, the value of the state flag colors of Ethiopia 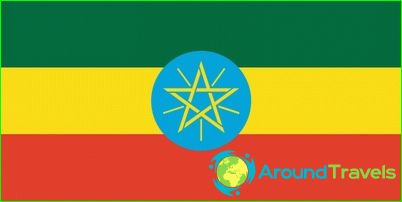 One of the state symbols of the Federal Democratic Republic of Ethiopia - its flag, which has been approved in 1996.

Description and proportions of the flag of Ethiopia

Ethiopia Flag - a rectangle whose widthtwo times shorter than its length. It is a classic tricolor, whose band are equal. The lowest band - a bright red color, the average field - dark yellow, and on top is a band of dark green color. The middle of the flag takes a coat of arms, located equidistant from the edges of the cloth.
Coat of arms of Ethiopia on its flag - a circle of blue with the logo placed on it the country carried out by the yellow. It is a five-pointed star radiating from it and five rays.
Background Emblem Blue color symbolizes peace forthe peoples of Ethiopia and the pentagram - their unbreakable unity. flag colors reminiscent of the important qualities and the hopes of the population. The red stripe - a tribute to the heroism shown by patriots in the struggle for independence, yellow box represents equality and hope for justice, and the green color - a symbol of development and labor.

The story of the Ethiopian flag began inthe end of the XIX century, when the country was a struggle for the unification of the country into a centralized state. In 1897, on the flagpoles was first hoisted the tricolor green-yellow-red colors in honor of the victory over the Italian army occupied the area before Tigre as part of Ethiopia. In addition, Ethiopia to stop the advance of the British colonial empire on the black continent.
In the twentieth century Italy again attempted seizure of Ethiopia, which was crowned with success, but five years later, in 1941, the British liberated the country, and there was a lion with a golden crown on the flag of Ethiopia.
Over the next few decades the countryshaken by internal and external conflicts, and different coats of arms appeared on the tricolor. In 1975, the tricolor coat struck with the image of a bird, flying in the background of a golden sun. Blue disc, which served as the background image, bordered green branches in the form of a wreath.
Then the monarchy was replaced by a "red countryterror ", and the flag received a new coat of arms depicting the sun's rays on a blue disk and the star, crowning emblem. 1991 brought the overthrow of the pro-regime and the Ethiopian flag back to the option of simple red panel. In 1996 it was approved the final version, and which are now in Ethiopia.

Airport Petropavlovsk-Kamchatsky: diagram photo. How to get ...

The capital of Togo map, photo. What is the capital city in ...