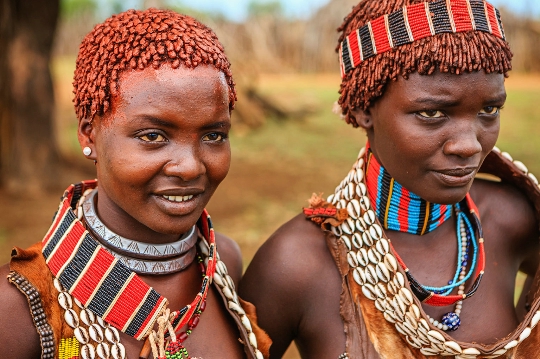 Museum of Peoples and ethnologists call Ethiopiahistorians. On the sun-scorched land is home to about eighty nationalities, each of which has its own customs, crafts and even language. Literary creativity Ethiopians originated not less than two thousand years ago, and in ancient monasteries, not only painted icons, but also created a priceless manuscript. Ethiopian traditions were formed based on biblical precepts and its culture was determined by a combination of major world religions, found refuge in the sun-baked plateau.

The country's history is full of ups and downs, tragediesand confrontations. For many centuries it tried to conquer the powerful empire, which included Islamists and European colonizers, the nomads and the Nazis. To resist external forces, culture and traditions of Ethiopia could be preserved in its original form, so mysterious and great Ahmarskoe kingdom left to those in the new millennium.
The most famous monuments drevneefiopskogoAxum obelisks state considered erected in the IV century BC Since then, the tradition of Ethiopia to build stately stone buildings and continued to live in the stone churches of Lalibela, carved into the red rocks, and in the castles of Gonder.

Without a knife and fork

Once at the table in the Ethiopian house, inexperiencedthe traveler may even get confused: it is not accepted there with the help of devices, and the usual knife and fork locals replaces "injera". This flat cake made of flour special cereal has a porous structure and perfectly captures a small portion of every serving. On the table there are and vegetables, and meat, but the degree of severity of food is always check with your waiter or hostess.
Gesture is a special arrangement to mannice tradition, when the counterpart feed each other out of his hands. By the way, before you start the meal, the Ethiopians always wash their hands. It is considered a sign that the table sits a man educated and civilized. Get up from the table taken not too full. According to tradition, Ethiopia, famine brings willpower and stamina, but because the residents of the country since childhood learning for a long time without food and water.

Children - are the most important people in Ethiopia. Up to two years, kids are trying to breastfeed and not left alone even for a minute. Christening held on the fortieth day after the birth of a boy and eighties, when there was a girl in the family. It was then that the child receives a name. Previously, do not, in order to prevent evil spirits to penetrate the consciousness of the child, has not yet received God's protection.

Where to eat in Bratislava - cheap and ...