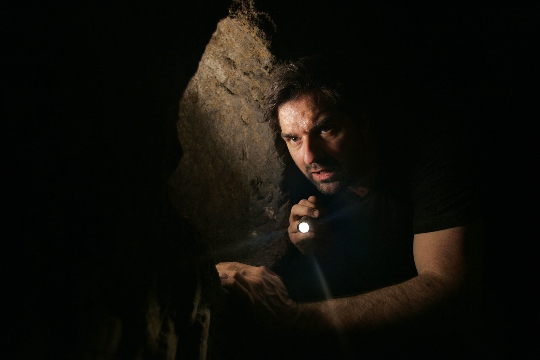 Museums are always attracted by its mystery andspiritual connection with history. Works of art from different eras and trends, brilliant authors, ancient relics and still unsolved mysteries beckon every year hundreds of thousands of visitors. Don Vayldman, a leading television show "Museum puzzle" on the entertainment channel travel Travel Channel, exploring the mysterious memo cultural and historical heritage. In search of extraordinary stories he travels around the world to create a unique video tour of the most interesting and fascinating places on the planet. In the show "Museums mysteries", he will visit the famous museums in the US, try to reveal historical secrets and his own eyes will see objects, which says the whole world! And in December, Don will continue its exciting journey in the new show "Monumental Secrets" go to Europe, and will introduce the audience to the history and legends of the most amazing monuments located in London, Berlin and Paris. We suggest you to go with Don in the journey of discovery and learn about the most intriguing museums and historic exhibits, secrets which have not yet been solved.

The most mysterious museum in the world

Louvre is certainly not only one of the mostfamous museums in the world, but also one of the most mysterious. His collection includes exhibits of the period of origin of ancient civilizations and fascinates tourists from all over the world. Until now, no one knows for sure not, whence the name of the museum itself. According to one version, it emerged from the Old Saxon word «lower» - «castle», on the other - has something to do with the word «loup» - «wolf», and this is not surprising, because the Louvre was built on the marshes, which were then flooded wolves. Another mystery of the museum is the sculpture of Venus de Milo exhibited here. Historians are still trying to guess who the author of this work of art and why sculpture has no hands? Some people believe that a monument was originally could be created without these parts of the body, on the other hand - perhaps a marble goddess was holding something of value ... Some researchers argue that the mirror was in her hands, while others believe that it was covered that it covers. Recently, the most popular story of the French ambassador in Greece, who allegedly was able to reveal this mystery. He visited the family Buttoniov, whose head at the time found Venus. His older son already said that in the hands of Venus was an apple!
This assumption has produced a sensation: unusual reversal of Venus shoulders, pose very difficult to mate with an apple in his hand. In addition, for such a complex Greek statue apple would carry more biblical in nature.
On an island where the goddess was found, not fitted outone expedition, but the search yielded nothing, and no hands were unable to find. On the other hand, this incredible story gave way to fantasy and activists who create different models of arms and send them to the Louvre. Sometimes workers even arrange museum fotopokaz Venus with her hands, but what is surprising is that none of the models arms still does not fit this statue.

The most mysterious picture

"Crying Boy" is perhaps not the only one ofthe most mysterious, but also one of the most famous paintings in the world. The author of this masterpiece of Spanish painter Giovanni Bragolin. At first glance, the picture is absolutely harmless, it depicts a little boy in tears. Upon closer examination it can be seen that the boy does not seem much upset or offended, but in his eyes you can see the anger. There is a legend that the boy's father (who is also the author of the portrait), trying to achieve the brightness, vitality, real emotions and natural fabrics, lit a match in the face of the baby, while the boy was terrified of fire. The kid was crying and his father drew his emotions on canvas. One child broke down and cried out in fear of his father: "Burn you yourself!". A month later, the boy died of pneumonia, and soon the artist's body was found by his burnt house next to the miracle of surviving a fire in the picture. On this sad story it would end, if in 1985 with the bands of the British newspapers did not descend application that almost every one of the burned buildings firefighters found reproductions of "Crying Boy", and the most surprising - the fire did not hurt them. Until now, at the mere sight of a picture becomes uncomfortable.

The most unusual mechanism ever created

In a small village in Austria is Kaga work of art, which is called "world car." In 1958, Franz Gzelmann, the son of a poor farmer, saw a large model of the atom at the Brussels World Exhibition. Iron sculpture "Atomium" immediately became a symbol of the peaceful use of nuclear energy and literally fascinated Franz. He bought a sculpture of the model of the atom, and n thought of his own project, which eventually spent 23 years of his life, using as a material scrap, improvised piece of iron and items from the market of second-hand items.
Franz built his strange contraption aroundmodel of the atom, adding bells, clocks, fans, conveyor belts, whistles, chains and even the xylophone. Its design has been completed as a result, the structure 6 m length and 3 m in height was a complex mechanical system consisting of the various components. Even today, this structure is capable of impressing any, on the other hand, it can be called the most bizarre mechanism ever created in the world. The fact is that no one knows what the author intended by design, this machine! He concealed his creation of the family, until it was almost completely finished, and then he suddenly died, and without revealing the secret purpose "World Machine". Details of this construction work on 25 and motors have different kinetic processes: shaking, rocking, spinning, and also reproduce sound and light effects. In many theories currently exist on why Gzelmann devoted the best years of his life building this crazy machine. Although precise answers to the questions have not yet been found, but still "world car" is one of the strangest projects in the history of mankind. Hopefully, with the help of this mechanism Franz wanted to show and discover the most secret and hidden doors of the human soul.

Coat of arms of Ecuador: the photo, the value description

Food in Costa Rica. Prices for food in ...