Articles on Paris
by Leslie 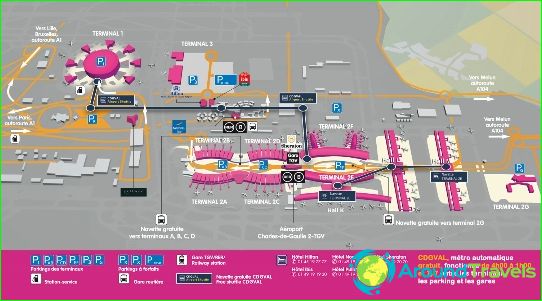 Paris is known for the three airports. First of all, the airport Charles de Gaulle, which is considered the main French airport and is in the global top ten in terms of passenger traffic. This fly Russian direct flights, as well as interchange. For the company Air France is considered to be the Airport base.

The airport is located twenty-five kilometersof the capital of France and has eight terminals. All terminals are connected by transitions. The second terminal station has RER line B, which allows to comfortably reach the most of Paris. Here there is also a railway station, which connects the station with all the big French cities, as well as Brussels. Between the terminals can move through the free metro. The cost of travel to the capital is equal to a little more than nine euros and thirty minutes enough to get to the city.

Another Paris Airport - Orly Airport. It is designed for internal transportation in the country. But there are also European flights. The airport is located near Paris (just fifteen kilometers). He has a pair of terminals. With the city this airport is connected via RER line. To get to the airport you can by bus.

Finally, the third airport in Paris - Beauvais, helocated in Picardy. On the other airports it is different in that it is a port for low-cost accommodation. The main carrier is serviced by the airport, - Ryanair. But working here are other companies that offer usually cost transportation.
The airport is eighty-fivekilometers from the capital, and he did not get up by commuter train or subway. However, using the bus or taxis here can be reached without any particular problems. The airport operates two terminals.
Traditionally visitors are satisfied with the workeach of the three Paris airports. In addition, the airports themselves have evolved and improve their own level of service, which is already high. So welcome to any of the airports of Paris, and you yourself will be able to assess the quality of service offered here!

Rent a car in Georgia. Car Rental in ...