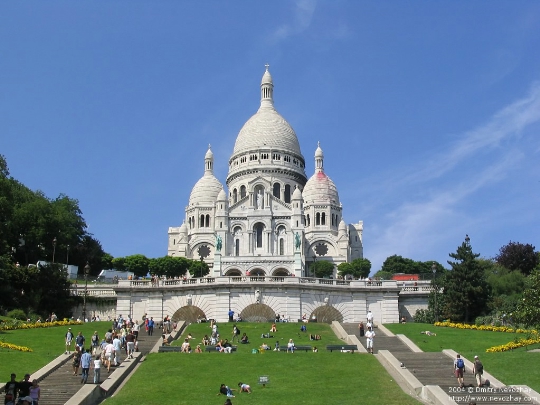 This temple can be seen from almost anywhere in Paris andIt has long been as much a symbol of the French capital as Notre Dame or the Eiffel Tower. Its air milky-white outlines of floating above the city in the morning mist, admiring the grandeur and ease of astonished tourists simultaneously. From the observation deck of the Sacré Coeur in Paris, the best views of the city, which can be seen from this point to the southern suburbs of high-rise.

On the Mount of Martyrs

The notorious events of the Paris Communebegan here, on the hill of Montmartre, the Parisians but because for a long time we did not want to see the temple on this place. They saw its construction as a mockery of the sacred memory of those who died for people's ideas.
Montmartre name translated means "mountainmartyrs "and was once an ancient Roman settlement existed here today 130-meter hill -.. a favorite place of walks and themselves Parisians and tourists where you opened many outdoor cafes, art exhibitions, street artists show their creativity and mimes - entertained the audience, hoping for a generous tip.
But the main decoration of Montmartre - Sacre Coeur is a basilica in Paris, whose name means Temple "Heart of Christ".

Meringue on a hill

That compared with meringue cake often domeTemple, hovering over the city. Its construction began in 1875 and became chief architect Paul Abadie, restored Notre Dame and about forty medieval churches and cathedrals across the country. Construction is literally at the very beginning has been suspended due to issues with the ground. Medieval quarry at Montmartre made unstable soil. As a result, the ingenious plan Abadi managed to strengthen the soil, but the architect did not live to see the completion of the construction ended in the twentieth century.
Basilique du Sacre Coeur in Paris, built from a speciallimestone, which is weatherproof becoming a lighter shade. The interiors of the temple are decorated with stained glass windows of stained glass and mosaics Merson "Reverence France to the Heart of the Lord."