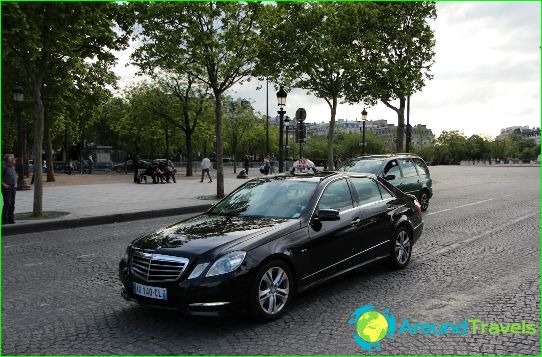 Taxis in Paris are more than 17,000cars: their parking (sign with white letters on a blue background TAXIS) you will find in the metro stations, in r / w station, at the main crossroads and the main tourist attractions, for example, the Eiffel Tower or the Champs-Elysees.

If you need a taxi, which takes you to the airport, order it well in advance, by contacting an administrator at or contract with one of the drivers at the taxi stand.

Stop the taxi on the street, but it should be borne in mind, if to the nearest taxi stand about 50 m, the driver does not stop the machine to pick up a passenger.

As a rule, drivers do not take more than 3passengers, since the seat next to the driver not taken hold. But if the driver will take 4 passengers, something extra for it will have to pay about 3 euros.

Tourists should pay attention to the fact that ifunder the guise of a taxi is lit white light, so you can use its services, and if the light glows orange - so the taxi is busy. If you see a lantern covered by a cover, so the driver is not involved at this point in customer service.

Tip: It is advisable to resort to the official taxi rather than drivers, private traders, since the latter may request the fare is 2 times more money.

The cost of a taxi in Paris

You have no idea how much is a taxi in Paris? Focus on the current rate schedule:

There are the D rate (indicator glows green), but because it is valid for travel to the suburbs, there is no fixed fare (the price it is advisable to negotiate before the trip).

It's worth noting that over the baggage, weighing 5 kg or more, provided additional payment - it is 1 euro.

It is worth noting that due to the low-speed traffic and downtime operates hourly pay: A- rate of 30 euros, the rate of B-34 euro fare C-32 euros.

Some taxi companies offercustomers the opportunity to pay the fare by credit card (it is necessary to specify in the order) - in this case, at the end of the trip you must obtain the driver check.

Move to Paris taxi is very convenient, especially after midnight, a taxi - it is the only transport, which can use the services.