Articles on France
by Blake 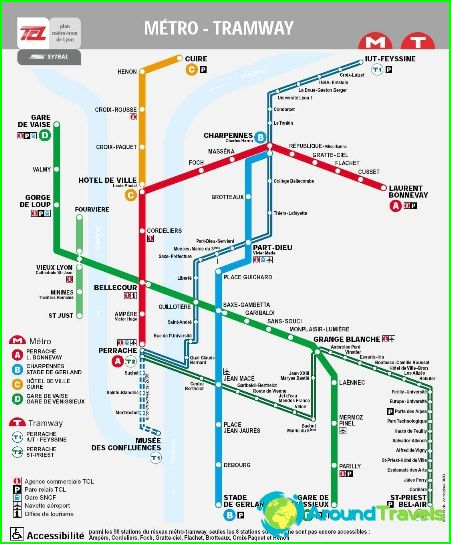 Metropolitan French city of Toulouse wasinaugurated in 1993. He is among the youngest in Europe and is managed by managers of state companies. The total length of the two subway lines operating Toulouse is 28.2 kilometers. For entry, exit and transplantation 38 work stations passengers. Dvuhvagonnaya section of each train can accommodate up to two hundred people. In one day, the underground carries no less than 350 thousand passengers, which greatly simplifies the task of land transport and reduces the amount of congestion on the roads of the city.
The decision to build the city subway lineCouncil adopted in 1983. After six years, the project started to implement, and the line was opened in 1993 A. She crossed the city from the south-west to north-east and received 18 stations for passenger service. The route passes through the city center, the station Marengo line A can transfer to a railway train, and Jean-Jaurès - to branch B. The builders plan - an extension of branch A, are marked on the diagram in red, north Lyunon suburb.
The line began to build in 2001 and solemnlyWe opened it six years later. Its length - 15 km, it includes 20 stations, denoted in the diagrams as yellow. Extending the route it is planned in a southerly direction to the station Lyabezh-Inopol.
To the system of high-speed rail transportToulouse include Bahn, denoted in the diagrams gray line C and tram route is marked in blue and marked E or T1.

The main metro station of Toulouse openedat 5.00 am and finish their work at 24.00. On Fridays and Saturdays, while the subway a few increases, and get to the station can be up to 0.40.
During peak hours the metro trains run from recordshort intervals not exceeding 80 seconds. At other times, the wait can be up to six minutes. The route of each of the lines will not overcome more than half an hour.

Tickets for the Metro Toulouse

Individual tickets can be purchased for travel inticket offices and machines in the stations. It is much more profitable for Toulouse guest will cost a ticket for unlimited travel for a day or travel for a few days.

The airport in Nice: circuit, photo. How to get ...