Articles on France
by Wyatt 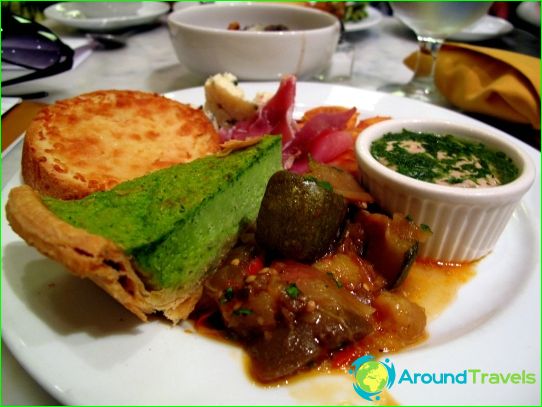 French cuisine is based on fresh and qualityproducts. The food is prepared so that each product has maintained its characteristics after cooking. Soups of France - it is the onion soup and the soup of leeks with the addition of potatoes. Increasingly popular is the fish chowder bouillabaisse.

Cooks countries use beef, veal,lamb, fish, game and poultry. Many dishes are prepared on the basis of freshwater and sea fish:. Carp, cod, pike, halibut and other seafood are used shrimp, oysters, scallops and lobsters. Very popular oysters - the most delicious French meal in the opinion of many gourmets. These shellfish are grown on plantations, or caught in the special zones. Flat oysters are designated Marin French, Belon and Arcachon. By weight of oysters are sold in the fall. Eat them raw and fresh. To open the shell uses a special knife. After opening the oyster should sprinkle with lemon juice to taste and disinfection. Next, it is necessary to eat by sucking out of the shell and enjoying the oyster flavor. In the French tradition, this dish should be washed down with champagne or white wine.
The French are actively used vegetables such asbeans, potatoes, spinach, tomatoes, onions of different varieties, eggplant, celery, lettuce, artichokes, and others. They were taken to prepare the first and second courses, side dishes and snacks. French residents pay great attention to cheese. They prepare them out of sheep's, goat's and cow's milk. On sale are hard, soft, fatty, seasoned and other cheeses. There are many varieties of cheese:. Gruyere, Roquefort, comte, Cantal, Camembert cheese, etc. are included in many French dishes. In addition, it is also served before dessert and wine.
Famous dishes are part of the nationalsauces. The country has prepared more than 3000 different sauces. French chefs expertly prepare meat dishes. Beef, pork, lamb and other meat stew, fried, boiled and baked. The classic dish - steak with potatoes fried. Among locals very popular has nearly raw steak with a light crust.
Amazing food are a variety of pies. They are made from rabbit meat, pork, chicken and pork liver, partridge and ducks. During the preparation of many foods, cook in a pan add a bundle of herbs or "bouquet garni". He makes ready meals is very fragrant. As part of the beam has a bay leaf, savory and parsley. From the resulting dishes is recovered.

Features of the national table

Dishes are used in France with natural wines. Most often on the table and fed semi-dry wines such as Burgundy, Provencal, Kangxi, Chablis, nectar, sauvignon and others. Wine is added to food during cooking. Some recipes require add it to soups. Light wines are usually drunk at lunch and dinner, combining them with mineral water and fruit juices. Because of strong drink is most often used apple brandy or Calvados.

Currency in Cuba: the exchange, importation, money. What ...