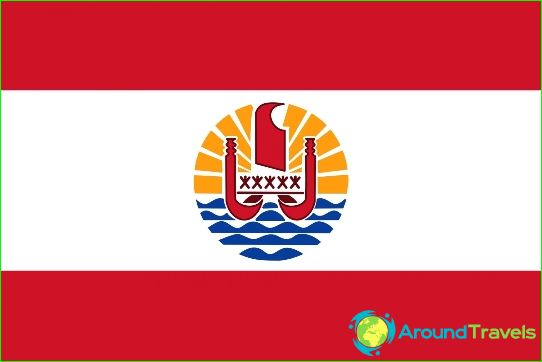 The official national flag overseasFrench Polynesia is the community since 1880 the French flag. In 1984, it was approved by the regional flag, which hung on all the events and public institutions, along with the French.

Description and proportions of the flag of French Polynesia

Flag of French Polynesia is arectangular panel divided horizontally into three parts. Extreme upper and lower bands are painted red, and have a width equal to a quarter of the width of only each flag. Mean - white, and its width two times larger than that of red stripes. In the center of the rectangle within the white stripe is applied to the coat of arms of French Polynesia.
This round emblem, whose main motive -a stylized image of a Polynesian canoe with a sail red. He placed five dark brown men who resemble the five archipelagos in the composition of communities overseas. Behind the canoe depicts the golden rays of the rising sun. It is the source of life on the islands and allows to grow crops. The boat floats on the waves of blue, symbolizing the Pacific Ocean, the waters of which are located the State French Polynesia.

The history of the flag of French Polynesia

Power in Azerbaijan. Prices for food in ...

The national drink of Austria. Alcohol in Austria: the price, ...