Home>Articles on Germany>Articles on Berlin>Zoo Berlin - photos, price, hours of work. How to get to the zoo in Berlin

Zoo Berlin - photos, price, hours of work. How to get to the zoo in Berlin 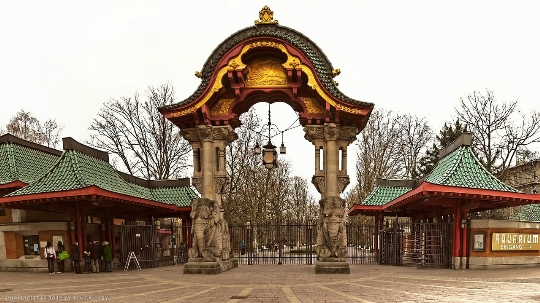 Zoological Garden, the German capital is included in theten of the earliest discovered in the world. He appeared on the map in 1844, and after a quarter of a century the reins took over Dr. Heinrich Bodinus. During his Berlin Zoo has become a real tourist attraction. Doctor supervised the construction of the famous Elephant Gate, adorning the entrance to the park, and offered to build enclosures for better monitoring of ostriches, antelopes, elephants and flamingos. For the convenience of visitors to the territory to open a restaurant, where it was decided to meet with friends and arrange a Sunday family dinners.

That is translated from the German name soundszoo in the German capital. Visitors are given the unique opportunity to meet from 15 000 animals representing more than a thousand species.

The Berlin Zoo can be especially rare to seespecies such as pandas or birds kiwi. Employees take pride in the population of gorillas, which are created as close to natural habitat. Tigers coexist in cages with lions, zebras to rhinos, and favorite pastime was watching the regulars for feeding various groups of inhabitants of the zoo.

The exact address in Berlin Zoo - Hardenbergplatz8, 10787 Berlin, and get to the favorite destinations of Germans and visitors easiest metro U-bahn. It should reach the Zoologischer Garden station, which is located at the intersection of the lines U2, U12 and U9. Zoo included in the tour bus route N100.

Hours Berlin Zoo depend on the time of year:

Entrance and ticket sales end one hour before closing the zoo.
On Christmas Eve, December 24 zoo staffgo home early to start preparing for the holiday dinner. Gates close at 14.00. Cashier, where you can buy tickets, are on both sides of the Elephant Gate. Wishes to meet with the residents of the park can choose to see only the zoo or aquarium and more. Combined ticket is cheaper than two separate:

The children under five years old are admitted free. It should be ready to accept that age have to present documents with photos.