Home>Articles on Germany>Articles about Cologne>Streets of Cologne - photo, name. List of well-known streets in Cologne 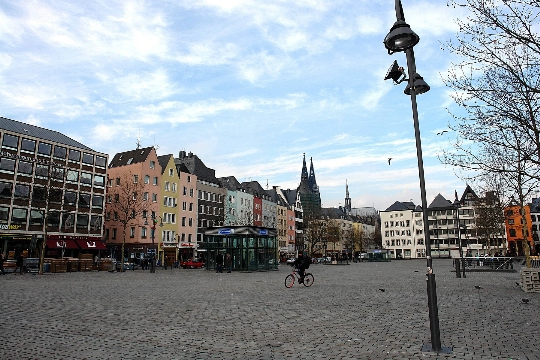 With its history stretching back nearly twothousands of years, rightly Cologne is one of the most interesting and picturesque cities in Germany, as well as the most important tourist center of the country. The modern city - a major metropolis that attracts not only tourists, but also shoppers from all over the world. And the streets of Cologne even called this a mecca for German shopomanov.

Traditionally, tourists visiting Cologne for the first time,the first thing sent to inspect its attractions such as the Town Hall, Cologne Cathedral, Fragrance Museum, Chocolate Museum, the Roman-Germanic Museum, the Church of the Holy Apostles and other temples. However, there is an alternative list, which includes: the embankment of Cologne; shopping streets are Hohe Strasse and Schildergasse; Ahenershtrasse street. This route is ideal for those who do not have much time to explore the city, but want to see and buy as much as possible.

The street itself isattraction. It offers the most picturesque views of the city and the Rhine River, so willing to make beautiful photos in the first place to head for is here. Walk along the promenade is a very pleasant, because here everything is specially adapted for this purpose.

Located in the heart of Old Town. Throughout the streets of crowded shops and numerous shops selling a variety of goods, so wishing to purchase a souvenir something special in the first place need to hurry here.

This street has a rich infrastructure,like the previous one, and more interesting as a historical monument. It is known that the first road was laid here in the days of the Roman Empire, and before that ran here the way migration of primitive people of the Neolithic era. So lovers of antiquity definitely need to look here. Although, of course, today Ahenershtrasse little different from other modern streets and you can just be nice to relax in one of the many cozy cafes.