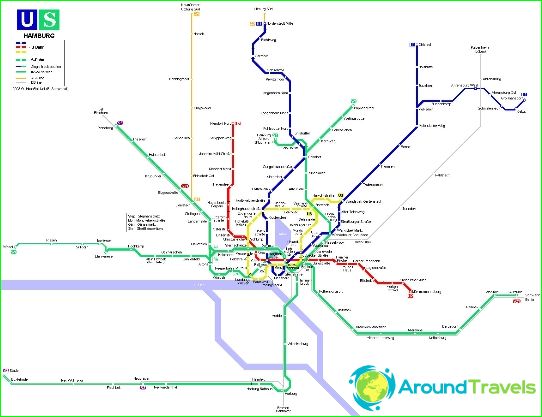 Subway in Hamburg was opened in February 1912and today consists of four lines serving 91 stations on the route 104 km long (2012), and carrying more than 205 million passengers each year. Hamburg Metro (U-Bahn) - rapid transit system serving Hamburg, Norderstedt and Ahrensburg in Germany. Although technically it is underground, with most of the lines are above ground. Subway (U-Bahn) is closely connected with the system of suburban trains S-Bahn, which also has underground sections.
In early 1906, the Senate of Hamburg has signeda contract for the construction of underground railways with Siemens & Halske and AEG in Berlin. And on October 7, 1906 the first section was completed. Thus Hamburg became the third city in Germany (after Berlin - Schöneberg and 1902 - 1910), which appeared in its subway. While Metro was named Hoch-und Untergrundbahn, since a significant part of the tract passed either over land or through the tunnels of not more than street level.
In the summer of 1943, during the Second World War,Metro Hamburg was heavily damaged by Allied air bombardments. Rothenburgsort Central Station was completely destroyed. It took five years before the network was fully restored and continued to grow.

Hamburg Central metro station is consideredHamburg Hauptbahnhof, where the Central Station-distance trains, suburban railway (S-Bahn) and the underground (U-Bahn). It is divided into two stations: Hauptbahnhof Süd lines U1 and U3 and Hauptbahnhof Nord line U2 and U4.
Another important station - Ohlsdorf, through which the line U1 and S1. It is the closest station to the airport of Hamburg. From here to the airport terminals every 10 minutes, the bus leaves.

Hamburg Metro runs from 04:30 am to 01:00 nights from Sunday to Thursday. On Friday and Saturday the metro stations, the majority of working around the clock. Interval of trains is 5 to 10 minutes in the center, and an perefiriynyh areas U1 line rate movements reduced to 20 minutes.

Tickets for the underground can be bought from vending machines or atbuses. Fares depend on the travel area, as well as the use of time. For tourists provided Tourist Card Hamburg Card, which allows unlimited use of public transport in Hamburg, as well as access to various attractions and discounts. For children under 6 years old travel on the subway free accompanied by an adult. Fines for free-riding is very high.

Airport Dresden diagram photo. How to get ...