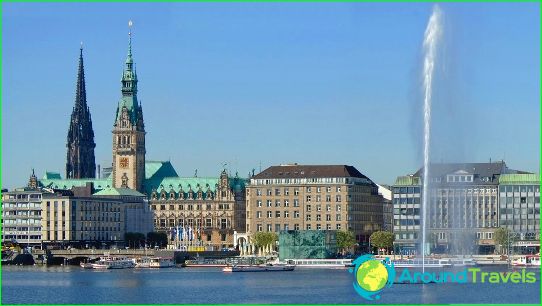 This city in Germany has established severalsolid records. It is the most populated in the Old World among non-capital cities, one of the largest ports in Europe, the second largest population in the country and the seventh - the European Union. But for travelers who book trips to Hamburg, all of these records are not so significant. Much more important historical sites and museums, parks and restaurants, galleries and shops, in a word, everything that constitutes the meaning of "quality holiday".

Hamburg is located a hundred kilometers from the mouthElbe, which flows smoothly into the North Sea, making the marine harbor jutting far into the mainland. So actually spaced at 110 kilometers from the sea, the city is not only the river, but also a seaport.
The climate and the proximity of the sea providesuniform rainfall throughout the year and rather mild winter, when the thermometer rarely drop below five in the afternoon. Summer is pretty cool and rainy, the temperature usually does not exceed 23. The best time for tours in Hamburg - April, when the most minimal rainfall, and a pleasant 15 makes comfortable walk.
City appeared on the world map in the V century during the time ofGreat Migrations. Like other European cities, Hamburg fought a lot, rises and falls, built the fortress and tried to win his place in the sun. Today, its population steadily approaching two million, and the level of economic development allows to consider the city one of the most advanced in the world.