Home>Articles on Germany>Coat of arms of Germany: the photo, value, description

Coat of arms of Germany: the photo, value, description

Coat of arms of Germany 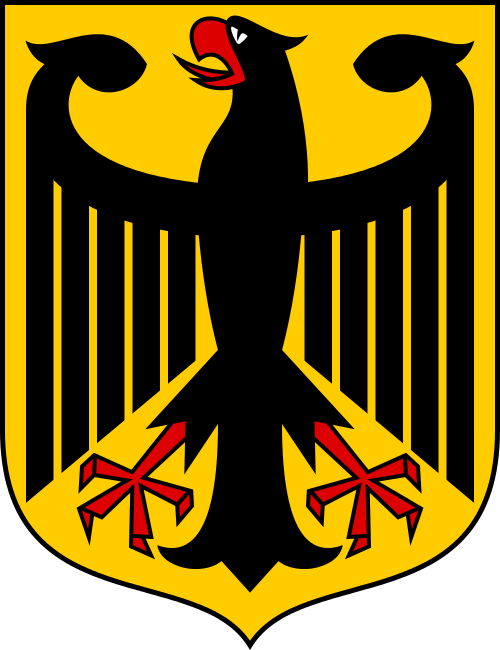 Perhaps, for many Russians, the coat of arms of Germany is linkednot too pleasant, not to say tragic memories of the Second World War, as its main image - an eagle, one of the most fearsome raptors planet. Fortunately, the bird depicted on the state symbols of Germany, it looks significantly transformed. And now it does not look menacing, but solemnly and powerfully.

The main parts of the emblem

On the main official symbol of Germanythere is only an eagle, his image is placed on a gold shield. Itself a bird with outstretched wings painted black and its beak, tongue, paws and claws - scarlet. According to the principles of heraldic eagle head turned to the right.

Leafing through the pages of history

Eagle - the symbol of the sun, the courage and vitality. It is a value attached to this bird in the mythology of different peoples and countries. Even during the reign of Charlemagne appears the coat of arms of the Holy Roman Empire, which meets well-known combination of colors and symbols: gold background; black Eagle.

However, in the XV century, the emperor symbol, the eagle,He had a second head and a single crown is placed on top. It is the image of a bird remained on the arms of the Austro-Hungarian Empire, and in 1848 appeared in the official symbol of the German Reich, unlike the various kingdoms and duchies, which could be lions, bears, crowns, castles and keys.

Eagle took its permanent place on the symbolsGermany and during the combined German Reich (until 1918), and the Weimar Republic, who replaced Reich and existed until 1933. Nazis to intimidate added a swastika and an oak wreath, the symbol looks too gloomy.

The modern coat of arms of Germany - a replica of the Germansymbol, enacted in 1928 year. A drawing was invented even earlier, in 1926, the author is Tobias Schwab. However, experts say that the tail of a modern German Eagle shorter. Proud and formidable bird permanently settled on the main state symbols of Germany and share this honorable place no one is going.

Currency in Belgium: the exchange, importation, money. What ...