Home>Articles on Germany>Flag of Germany: photos, history, the value of the state flag colors of Germany

Flag of Germany: photos, history, the value of the state flag colors of Germany 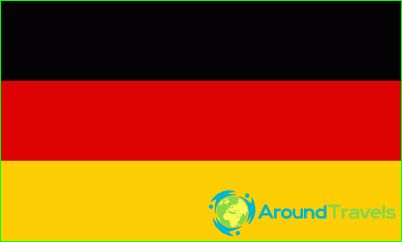 The national flag of Germany takes the form of a rectangular cloth consisting of strips of black, red and gold color, which are arranged horizontally.
Black and gold colors are still in useMiddle Ages in the German coat of arms. The black color symbolizes strength, courage and great German past. A little later these two colors was added and the color red.
It is interesting that in the era of the liberation war,aimed at fighting against Napoleon in Germany Jena student union was founded. Most of its members have used for their designation is a black and red colors. In 1816, the female population of Jena as a sign of deep gratitude for the courage of the student union of the city gave the red-black-and-red flag, decorated with an oak branch gold color, hand-embroidered on it. It was from the time the student union of the city Ian took the tricolor flag as its symbol. Since that day a combination of black, red and gold began to be seen as a symbol of the opposition in a bourgeois-democratic forces. But for German students and liberals in the aftermath of the Napoleonic era of black-red-gold tricolor was recognized as a symbol of the struggle for the unification of the country. Explanation of symbols on the part of the German tricolor Patriots characterized as follows: black meant gloomy dark night of reaction; Red - the blood of the fighters shed in the struggle for democracy and freedom; Gold has become a symbol of the sun of freedom, which should climb over the entire country. And here is the famous German poet Ferdinand Fraylingrata had its own interpretation of the tricolor, "Cheren gunpowder, blood red, with gold streaked with flame."
As a national state flagGermany flag in the black-red-gold color was adopted for the first time only in 1919. The black-red-gold combination has become a symbol of the idea of ​​a united free and democratic "Great" in Germany and Austria.
It should be noted that Hitler tookblack-white-red flag color combinations, as a symbol of the unity and prosperity of the empire helped to bring him over to their side and tuned conservative monarchists bourgeoisie. It is for this reason, the national banner of Nazi Germany became just such a flag, a black-and-white-red. With the defeat of Nazi Germany, the victorious countries have adopted a ban on the use of all Nazi symbols. This prohibition extends to the flag. Therefore, the new federation flag again became a black-red-gold flag, which symbolizes the unity and freedom.

Children's camps in Croatia in the summer. Children's ...