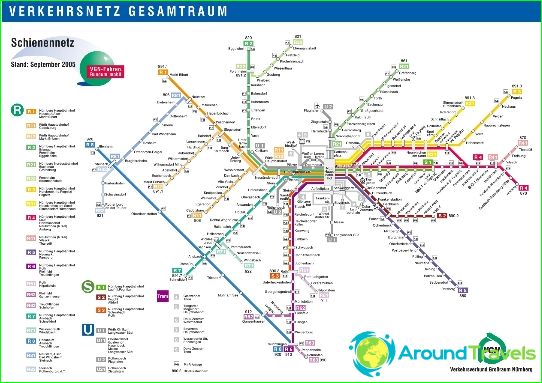 In conjunction with the city's metro trainNuremberg's main form of public transport of the city and the surrounding region. In Germany, it is the fourth in size underground, and every day its services are used by more than 320 thousand passengers.
The total length of the three existing linesMetro Nuremberg is 36 km away, and for entry and exit of passengers and the transplant is open 46 stations where all the information is presented only in German.
Plans to build a subway in Nuremberg bornin 1925, but the project has not even tried to implement because of the technical complexity and the lack of finance. In 1938, the government removed the part of the tram tracks into the earth, to the National Socialist parades were held without interference in the liberated areas. Only in 1963 and returned to the question of the City Council approved the restructuring and development of underground tram and the creation of high-grade underground in the city.
Modern subway consists of Nurembergthree lines, mostly taking place underground. The longest and most popular blue line U1, the journey on which is about half an hour. It connects the north-east of the city from the south-west and its end points - the area Langvaser and clinic suburb of Fürth. U2 red line - the most important for the arriving guests to Nuremberg. It stretches from the south-west and connects this district with the airport, the main and north-eastern railway stations, and the only way to make a connection between the stations for transit passengers using public transport.
Platforms All metro stations are Nuremberga standard 90-meter length and elevators for the disabled and passengers with children have not experienced problems with movement. Other citizens can use the escalators and stairs.
U2 and U3 lines are fully automated and controlled by computers, and the U1 line will be transferred to a management regime in the next few years.

Opening station for passengers entrance 4.40 am and operate mainly to 1.00 overnight.

Tickets for the Metro Nuremberg

Buy tickets and pay the fare on the subwayNuremberg machines can be at each station. It is advisable to use petty cash, because not all machines accept payment cards and give change from large bills. A single ride will cost 2.5 euros, depending on the zone. The ticket is valid for 1 hour 45 minutes from the time of purchase, and therefore more profitable to buy a ticket for 10 trips - 10.10 euros - or buy a day ticket solo. This ticket entitles you to unlimited travel for the day and is worth about 5 euros.

Airport in Tehran: a diagram photo. How to get ...

Streets of Samarkand - a photo, name. List of well-known ...