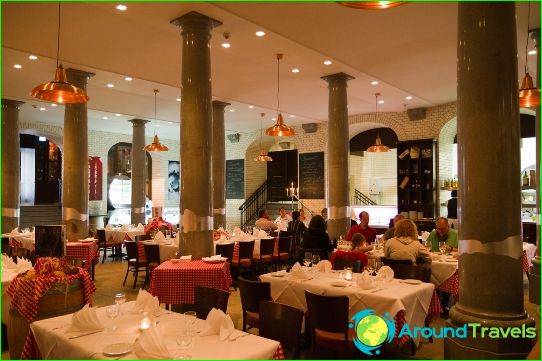 Four out of five Germans visit Statisticsrestaurants fairly regularly, ie, lunch and dinner there is no special reason. They can only envy, because the German cuisine - High-quality and thorough as those who invented it. The quality of execution of each dish refers to the unquestionable advantages of the inhabitants of the country that gave the world of Bach, Goethe and Immanuel Kant. Choosing German restaurants worthy of a visit during the trip, you should pay attention on authentic places with national cuisine. So it is possible to seek an assurance that the dinner is hearty, and mood - complacent.

Kitchen Germans - the meat in its millions of optionscooking, potato, sauerkraut and, of course, beer. The latter circumstance explains the popularity of German restaurants have a strong half of mankind. It is so common male eye pleasing picture: a blue-eyed blonde with a smile Gretchen pulls multiple liter mugs and manages at the same time joking with visitors and build their eyes.
Do not assume that this endsfamiliarity with the culinary preferences of Germans. Each region here - their own characteristics, preferences, and their own specialties, but because the entire menu in German restaurants are not to be expected.

And the leaders it was not alien

Beer Hofbrauhaus in Munich - a perfect examplegood old restaurant in Germany. Introduced as a court brewery in the XVI century, and today she will give one hundred points ahead of any modern institution, and in popularity, and in the spaciousness. 2200 people can simultaneously eat here the best varieties of lager and admire the dexterity and skill of the waitresses. At the time, by the famous beer could not pass either Lenin or Hitler. This fact makes the institution of impeccable ads and in Russian menu simplifies the task when complex German names are no longer succumb already pretty relaxed traveler.

Huge portions, reasonable prices, long-termimpeccable reputation and amazing history - indispensable components of all Berlin restaurants. For example, in the Zur Letzten Instanz c 1621 there are dishes "cross-examination" and "testimony" in the menu, and the name of the institution, translated from German as "In the last resort." It is here that according to the creators of "Seventeen Moments of Spring" legendary Stirlitz met the eyes of his wife.
Fifth place in the list of the most famous restaurantsPeace takes "Auerbachs Keller", opened its doors to a respectable audience in the XVI century in Leipzig. Goethe is so fond of it that it was in the cellar room suffered the action of the first part of his "Faust".