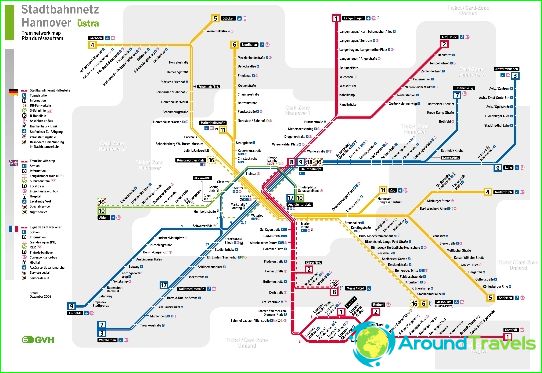 For more than a million urban agglomerationHannover subway construction was an important event and made it possible not only to significantly improve service for passengers of public transport, but also to avoid the problem of putting the ball in the peak hours on major highways. Metrotram Hanover combines the features of a classic subway and light rail, as well as in many other cities in Germany. This system has proved to be the most effective in terms of compact European cities.
The total length of subway tracks HanoverIt is more than 120 kilometers, of which the sixth part - underground lines. A total of routes for entry and exit of passengers and provided direct about 200 stops. One tenth of them are underground. Total lines in metro Hanover - eight, and each of them is indicated in the scheme of public transport its own color and number. All announcements at stations and in subway cars Hanover produced in German. The names of stations on the underground circuits are duplicated in English and French.
The main routes in the city center - underground. A first tunnel route was opened in 1975 and tied Waterloo Hauptbanhov. The line was put into operation in 1979 and joined the northern and southern parts of the city on the site Werderstrasse - Kröpcke, and route C - west to the east. Last he earned in 1984 and stretches from from Kröpcke to Steintor. Then the tunnel was extended to Kopernikusstrasse station.

Food in Abkhazia. Prices for food in ...