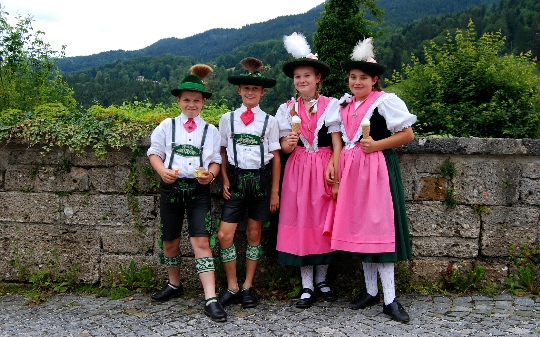 The Germans considered to be a model of punctuality,cleanliness and pedantry, and German cities - top accuracy and rationality. all is partly so, but the tradition of Germany, as the country itself, a very diverse and heterogeneous. It allows customs of the people of any nation to identify themselves, and in this sense, all Germans, once on the other side of the world, easily recognize fellow, even if he is not to speak in their native language.

Historically, the Germans have worked hard on the ground,because their schedule was entirely subordinated to the agricultural schedule. Modern German tradition - it is also an early morning rise of its people and hang up within 22 hours. It is therefore not made call after nine in the evening, or take too long to stay in the party. And in the morning, on the contrary, already at seven o'clock every German it is available over the phone and will not consider an early call disrespect to him.
German punctuality is proverbial and residentsGermany await visitors from the same. By the way, go to visit not worth without notice, and the next day it is desirable to thank the hosts for the warm welcome by phone or email.

One of the main German tradition - holdingthe annual Oktoberfest. This Bavarian holiday, but its popularity has led to the fact that in Munich during the meeting, you can meet people from all over the world. They share a passion for beer and Oktoberfest tradition originates from the day of the wedding of Crown Prince Ludwig to Princess Therese in 1810. The newlyweds were so fascinated by each other, which was offered to celebrate the wedding for everyone. Bayern drank beer for five days and decided since then to celebrate the anniversary celebration of the beer festival.

Going to Germany, it is important to know some rules that will allow the trip to go comfortably and positively: