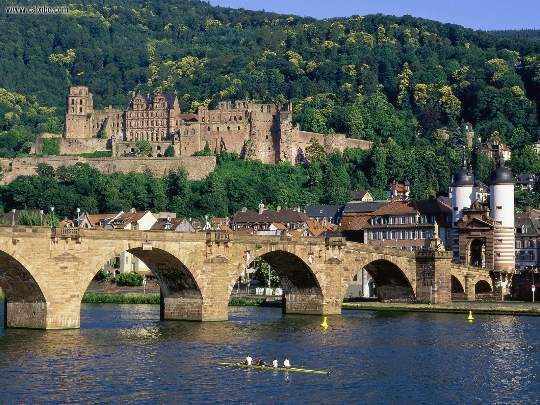 Germany is of great interest forRussian traveler. A huge number of attractions and recreational opportunities attracts millions of tourists every year. To have time to see everything in one trip is not too realistic, but because many people prefer to visit to start West Germany. This region is rich in amazing natural landscapes and its cities offer a rich program of excursions for the true fans of European culture and history.

West Germany - a region lying in the middleRhine on the border with Belgium, France, the Netherlands, Belgium and Luxembourg. Officially, the region includes the federal Saarland, Hesse, North Rhine-Westphalia and Rhineland-Palatinate. The largest and most famous cities in western Germany - Cologne, Bonn and Düsseldorf, and in general, this part of the country is one of the most important industrial regions of the Old World.

In the homeland of cologne

The beautiful old city of Cologne was an importantsettlement from the time of the Roman Empire. It is famous for its cathedral, whose construction began in the middle of the XIII century. In the temple in a golden casket relics of the Three Magi, making it one of the most important cathedrals of the Christian world. Temple Towers soar in the Cologne sky to a height of 157 meters and is an architectural dominant of the old part of the city. Frescoes and mosaics, statues and altars - the interior of the cathedral is amazing is not less than its external decoration, and so magnificent medieval building rightfully occupies a place of honor in the UNESCO World Heritage list.

For other attractions west Germany, will certainly include in the program guides tourists, on the right are:

Airport Tambov: diagram photo. How to get ...