Home>Articles about Greece>Articles on Athens>Airport in Athens: a diagram photo. How to get to Athens Airport

Airport in Athens: a diagram photo. How to get to Athens Airport 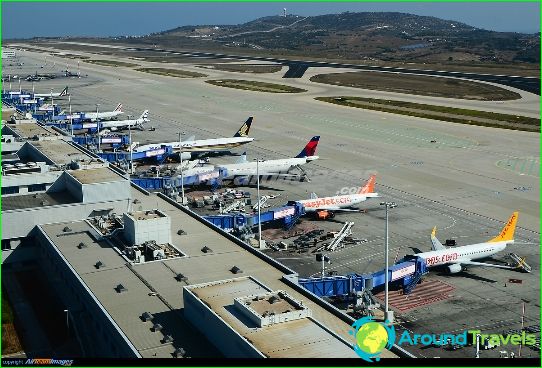 The international airport is located in the capital of Greece20 km from the city, in the center of the region of Attica. The name of the airport was given in honor of President of Greece Eleftherios Venizelos, who in the 30s of the last century made a significant contribution to the aviation development of the country.
Athens Airport has two runways, which are capable of receiving all types of vessels, including the largest airliner Airbus A380.
Every year served more than 16 million people. Every year the airport is increasingly used as a hub in South-East and East Asia.

Airport has two terminals, one of themIt is considered the main, and the second satellite. The main terminal caters exclusively vnutrishengenskie flights. Accordingly, the satellite terminal serves flights that go beyond the Schengen zone.

The airport of Athens is known for its investments in technology, so the quality of service is at the highest level. Arriving passengers are modern and technically equipped building.
In the terminal, passengers can find numerous shops, cafes and restaurants.
The friendly staff will help solve any problem.
Do not remain without attention and the children, for them are special games rooms.
Of course, passengers can use the services of banks, post offices, storage chambers, etc.

As mentioned above, the airport is 20 km from Athens. But, despite this distance, transport links to the city are well established:

Activities in Norway in December: the prices and ...