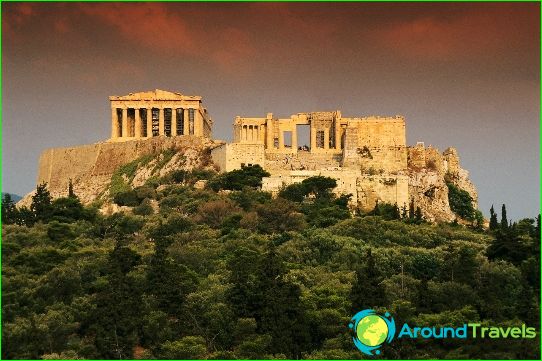 Greece's capital allows tourists to indulge yourselfshopping in the Plaka district, the whole family to spend time at the zoo, explore the picturesque surroundings of the mountain of Lycabettus, immerse yourself in the nightlife, especially in the areas of Psiri and Kolonaki ...

Despite the fact that the symbol of AthensSituated on the Acropolis, it deserves special mention. The temple, dedicated to Athena, was built under the supervision of the sculptor Phidias, who created many sculptures. And construction is unique in that its marble pillars are located in relation to each other at a certain angle, allowing you to see the facade of the Parthenon staring from three sides. Today, the Parthenon half destroyed, but that does not stop to gather around him crowds of tourists.

Acropolis - the main symbol of Athens, which pleasesGuests presence of a viewing platform in the eastern part (in the morning then raise the national flag of Greece, and at sunset - dipped) - a hill, a height of over 150 meters, will be able to see many of the sights of Athens, the place, especially Plaka, the Temple of Zeus and Lycabettus Hill.

On the territory of the Acropolis travelers will find a lot of facilities for inspection, among which are the following:

As at the foot of the Acropolis is located new museum, to be sure to look into (show the guests not less than 4,000 exhibits; open 6 permanent exhibitions).

It is worth noting that on the eve of New Year holidaysAcropolis pampers travelers interesting festive program, presented in the form of music concerts, tasting local dishes, thematic presentations for adults, a variety of performances and workshops for children.