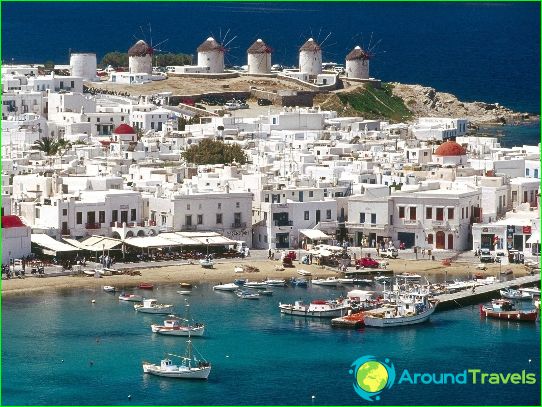 Ionian, Aegean and the Mediterranean Sea - isregion, where the islands of Greece. Total recovered more than 1,400 Greek islands. The population living on 227 islands. Each island of the country has a unique history, beautiful nature and monuments. Greek Islands are attractive tourist sites.

About 20% of this country occupy the island. Traditionally they are divided into groups: Sporades, Cyclades, Dodecanese, Ionian, Crete with nearby islands. Even on the small island, you can find interesting tourist attraction associated with Greek mythology and history. To this we can add the original flavor of each island: unique traditions, beautiful nature, architectural elements.

The most popular islands of Greece

Climatic conditions in the Greek Islands

Greece is in the Mediterranean areamild climate. Here the dry, hot summers and wet mild winters. The average temperature in July is 32 degrees, and in January is 10 degrees. Already in May, people open swimming season, completing it in October. The islands of Greece are especially beautiful in spring when they are covered with blossoming roses. For trips to the historical places of the country is best to choose in May and April. Suitable weather for a beach holiday is established in June.

Conventionally, the country's climate can be divided intoseveral areas. Mainland Greece has a climate similar to the Balkan. Summer is humid and hot, and winters are cold. Crete, eastern territories of the Peloponnese, Attica, the island of the Dodecanese and Cyclades - are regions where a Mediterranean climate prevails. The easiest way is transferred to the hottest time of the islands, as the sea is blowing a refreshing and light breeze.

When to visit the Greek islands

Tourists are encouraged to plan a tripfall, summer and spring. In winter, the tourist infrastructure on the islands is not acting very actively. Many entertainment facilities are closed and transport flights are canceled. The beginning of the season is considered April. Best beach vacation is possible from the beginning of June.

Flag of Laos: photos, history, the value of the state flowers ...