The population of Greece. Population in Greece: features, weight, composition 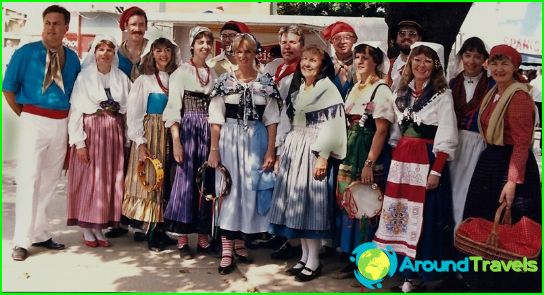 Greece has a population of over 10 million people (an average of 85 inhabitants per 1 km2).
In the middle of the XX century a large part of the populationwere the Greeks and only a small fraction - minorities: Turks, Roma, Armenians, Macedonians, Bulgarians (mostly occupied territories, located on Rhodes and in Western Thrace).
As for the last few decades, in Greece illegally arrived to 300,000 Albanians, but, nevertheless, the majority of the population - it is the Greeks.
National composition:

The official language is Greek, but some residents say Greece is also in French, and English.
Major cities: Athens, Heraklion, Piraeus, Thessaloniki.
98% of the population profess the Greek Orthodox Christianity, and the rest (2%) - Roman Catholicism and Islam.

Men on average live to 76, and women - 82 years.
Most Greeks to a ripe old age isexcellent health - it is greatly influenced by their diet: they eat seafood and fish, fruit and vegetables, nuts and honey, olives and olive oil, soft goat cheese, bean products ...
Largely due to nutrition, Cretevirtually unknown heart disease and cancer (the Cretans consume olive oil in 2 times more than in other regions of Greece and several times more than in Spain, Portugal and Italy).
Greeks love to eat dishes of spinach, which is by 11% reduces the occurrence of cardiovascular diseases.

The traditions and customs of the inhabitants of Greece

The Greeks are hospitable, friendly and superstitious: before you admire someone's beauty and elegance, they are 3 times knock on wood and spit over his left shoulder.
One of the Greek tradition is the reception: everyone who comes into their house (no matter how much they will stay in their house and what time of day they will come), they are treated to coffee, cakes, chocolates or alcoholic beverages (not treat anything a guest - bad form).
With great trepidation Greeks belong to the winterholidays. For example, at Christmas Greek families out into the yard and break there garnet grains which are a symbol of happiness and wealth. And with the onset of evening children go caroling - as a thank you they are given the coins and sweets.
A whole year of happiness and good luck will smile to him who by eating cake prepared hostess, will find in it a silver coin, which she puts in advance cake (she prepares it for the New Year).
The final stage of the winter holidays - EpiphanyJehovah in this period churches and temples are engaged in lighting the water and holding an interesting ritual. The priest must throw into the water (pond, river) cross, to which must swim and pick up the men present at the ceremony. It is believed that the first one to do it, will be a year of healthy and happy.
If you are thinking to Greece, keep in mind that business and friendly meetings and phone calls are not made to appoint and to make during the period from 15:00 to 18:00 - at this time, since the hot climate, the country rests.