Articles about Thessaloniki
by aroundtravels 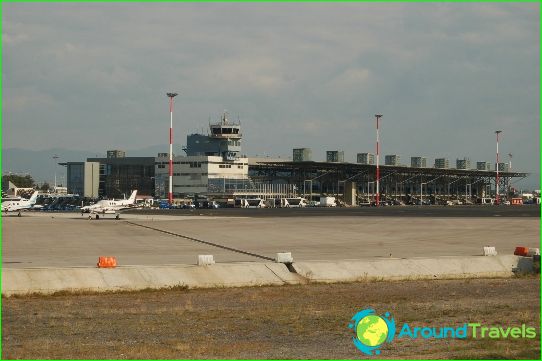 The airport of Thessaloniki "Macedonia" - one of theGreece's main airports, it is located in 15 km south-east from the center, in the town of Kalamaria. The airline has two runways with asphalt coating length of 2.44 km and 2.41 km, which allows you to take aircraft of medium and small types.
Daily from Thessaloniki flying toEuropean countries, CIS countries, including Russia. The airport structure includes the passenger and cargo terminals. On its territory are deployed Air Force units and the Aero Club of Greece Thessaloniki, representing small-engine aircraft.

Creating the airport in Thessaloniki falls onDuring the Great Patriotic War, when the fascist invaders built here a runway length of 600 meters. It was only in 1948 from Thessaloniki's first civilian flights have become implemented.
In the early 50-ies of the last century was createdartificial runway with asphalt coating length of 1.8 km, in the same year built the first building of the terminal in Thessaloniki with the control mission control point on the roof. By the end of the 50's runway was expanded and extended to 2.4 km.
In the autumn of 1965 of the terminal building wasKalamaria moved to a place where it is to this day. Over the lifetime of the passenger terminal has been significantly expanded, made large-scale reconstruction and technical re-equipment of the airport as a whole, laid a new runway parallel to the existing one.
Today it is a modern airline, meeting all the requirements of international standards, capable of receiving service all types of aircraft with takeoff weight of up to 170 tons.

Despite its small area andcongestion during the peak tourist season, the airport has all the necessary facilities for the comfort of passengers in its territory. It provides convenient navigation system that allows passengers to flexibly move around the airport, voice and visual warning system for aircraft movements, hour security Airport.
For persons with disabilitiesorganize meetings and support to their destination. Souvenir boutiques, internet cafes, offices selling tickets. The only downside is the lack of storage facilities.

From the airport in Thessaloniki, the city established the movement of buses and city taxis, and shuttle service is available.

Which sea to Morocco? The sea in Morocco ...