Home>Articles about Honduras>Flag of Honduras: photos, history, the value of the state flag colors of Honduras

Flag of Honduras: photos, history, the value of the state flag colors of Honduras 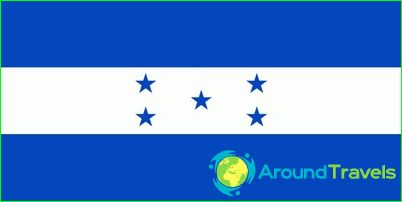 State of the Republic of Honduras flag was first raised in 1866 after its approval as one of the essential symbols of the country.

Description and proportions of the flag of Honduras

The classical form of the flag the flag of Honduras -a rectangle whose sides are related to each other in a ratio of 2: 1. Honduran flag field is divided horizontally into three parts on the equivalent width. The upper and lower strips are painted in bright blue, and the central band - white. On average, the flag field are five five-pointed stars, the color of which replicates the color of extreme fields. A star is located in the center of an imaginary rectangle, and the remaining four - in its corners.
The blue color of the flag symbolizes Hondurasexpanse of water of the Caribbean Sea and Pacific Ocean surrounding the country from the east and the west. Stars on flag - a country that once were part of the Central American Federation. Placed together, they symbolize the hope for the revival of the country's population of close relations between the Commonwealth.
Navy Flag Honduras practically repeatsflag the national flag. The difference lies only in the fact that extreme strips have a deep blue color, and in the center of the white area is the country's coat of arms.

History of the Honduran flag

Proclaiming independence in 1821 fromSpanish colonial rule, Honduras raised the flag on which were located diagonally from top to bottom and left to right white stripes, dark green and bright red flowers. At the center flag coat of arms depicted on a white field - green, with a red - white, and green - red stars.
In 1823, residents of the country have taken asflag cloth, similar to the modern version. The lower and upper horizontal stripes on it had a blue color, and the average field was white. In the center of the rectangle positioned countries emblem. In 1839, the coat of arms was removed, and the color of the extreme bands has changed from blue to deep blue.
As such, the Honduran flag was used until1866 when in the middle of it first appeared five blue stars and extreme field again acquired a lighter shade. This is the view of the Honduran flag exists today as a state.
Adopted in 1898, the change of color stars on gold lasted until 1949, after which the form of the flag of Honduras returned to version 1866 and has since remained unchanged.

Flag of Guinea-Bissau: photos, history, the value of the state flowers ...