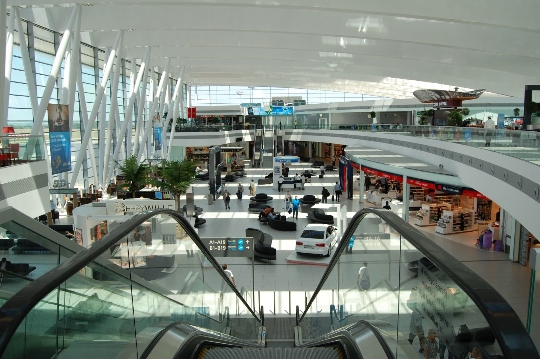 In Hungary, fly "on the water" - the whole countryIt is a solid resort and healing thermal springs beat here, literally, everywhere. From several airports Hungarian special significance for Russian travelers is the capital. It is committed to Budapest from Moscow daily regular flights of "Aeroflot". The journey time is 2.5 hours.

Among the four Hungarian international airports status assigned to the three air harbor:

Budapest Airport. Liszt is located 16 km south-east from the center of the Hungarian capital. Transfer to Budapest is carried out:

The departure waiting area at the capital airportHungary's currency exchange, snack, send mail to charge mobile devices, use the free wireless Internet access, and even to visit the museum a few minutes walk from Terminal 2.
Among airlines flying tothe capital of Hungary - "Aeroflot", AirBaltic, AirChina, AirBerlin, "Belavia", Brussels Airlines, KLM, LOT Polish Airlines. These planes fly from the UK, France, Germany, the United Arab Emirates and many other countries in Europe and the world. Transatlantic flights from Budapest makes Air Canada in Toronto and Montreal.

Hungary Airport Trash in the village 9 km fromPécs receives seasonal charter flights from Burgas in Bulgaria and the Greek islands of Corfu and Zakynthos. Especially popular among the tourists do not use, but if necessary, information about its services can be found on the website - www.airport-pecs.hu.

Christmas at the Vatican - photos, reviews

Airport Surgut: diagram photo. How to get ...