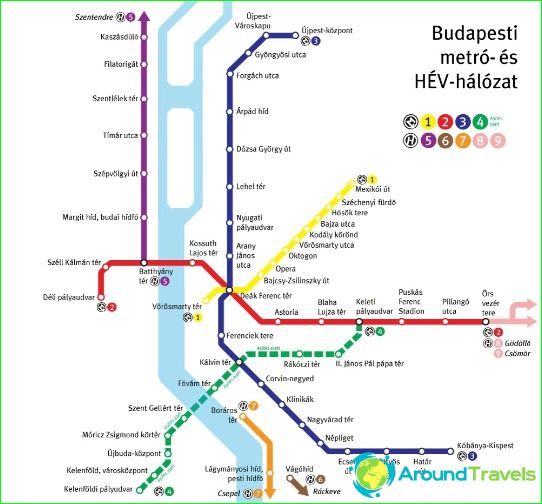 Metro Budapest - the oldest electrifiedunderground railway system on the European continent, the second-oldest (after London) in Europe. The first line of the Budapest subway was built in 1896 and in 2002 declared a World Heritage Site.

The first subway line was conceived as a means oftransportation of passengers from the city center in a city park on Andrassy Avenue. Saeima approved Hungary Budapest metro project in 1870. Construction began in 1894 and was conducted by German company Siemens & Halske, in the work were employed about 2,000 people, and the most modern equipment. The line was built by the open, and work was completed in strict deadline - May 2, 1896 (the year of the millennium, the arrival of the Magyars in the Danube), the metro was opened, in the events participated Emperor Franz Joseph.

The original route followed from northeastin the south-west along the Andrássy Avenue from Vörösmarty Square to the City Park. Its length is 3.7 km. The line consisted of eleven stations - nine underground and two on the surface. With a two-minute interval movement line was able to carry up to 35,000 passengers a day (today line serves about 103 000 passengers per day)

In 1895, plans were made public constructionthe next two subway lines, with lines from north to south and from east to west. A more detailed plan of the second line began in 1942, and the building was started in 1950 by decree of the Council of Ministers. Complete construction planned in 1955, but from 1954 until 1963, construction was suspended for financial and political reasons. As a result, line 2 with seven stations were built with the help of Soviet specialists and is open April 4, 1970. Line 2 is the only route across the Danube from Pest to Buda.

The first line has undergone a major renovation in the period from 1970 to 1973 - it was replaced by the rolling stock and the transition from right-handed left-hand traffic.

Planning Line 3 started in 1963,construction began again under the guidance of the Soviet experts in 1970. The first section was opened in 1976. To date, the longest Metro line in Budapest. Simultaneously with the opening of Line 3, Budapest subway system took color coding lines on charts and indicators Metro for easy identification. The first line was yellow, the second line - the red, and the third - blue. Green is used to refer to the suburban train network.

Budapest Metro operates daily from 4:30 am to 23:30. Tickets for the Budapest metro are valid for all forms of transport in the city, they are sold in vending machines, ticket office and city subway kiosks as the one - the one-off, and the "book" of 10 pieces. Composting tickets from "books" should be, without taking them apart. Individual tickets are valid for an hour after composting (in the first half an hour - the yellow line). On routes operate controllers.

Salzburg Stores. Shopping malls and boutiques in the ...