Home>Articles about Hungary>Hungary Flag photo, history, the value of the state flag colors of Hungary

Hungary Flag photo, history, the value of the state flag colors of Hungary 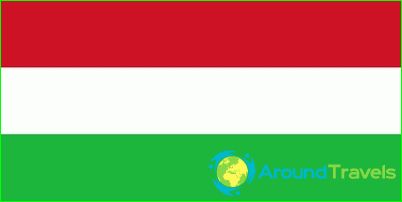 The national flag is rectangular in Hungaryshape and aspect ratio of two to three. It consists of three identical width horizontal strips of different colors. Their choice is determined by heraldic colors. From top to bottom are red, symbolizing the blood of Hungarian patriots fallen in the war for independence, white means purity and noble ideals of the Hungarian people, as well as the green color associated with hope for a better future of the state. The modern flag was adopted by October 1, 1957
Initially mentioned colors were used in the middle of the XVI century when plating drums. In the next century, these same colors were used for decoration and ornaments of sea banners of the coronation ceremonies.
After the Revolution of 1848 in red, white and green flag it was adopted as the national flag. As for the tri-color "green-red-white", he also served as the State Emblem. Then the green mountain were depicted on it, a red shield and white stripes. The first flags appeared in Hungary already in the IX century, and they were red. At the end of the X century, when Christianity began to actively implanted in Europe, marks the beginning of portraying white crosses. And because the XII and XIV centuries. Flags of Hungary consisted mainly of 6-8 red and white horizontal stripes. Green was added only in 1305, and he served for the image of three green mountains under a white six-pointed cross. After the entry of monarchs Anjou dynasty on the throne of the Hungarian flag in addition to the red and white stripes are also contained in itself the image of gold lilies on the green field. Almost 5 centuries banner adorned the royal crown, and it lasted until the Revolution Ser. 19th century. It is interesting that the Hungarian flag has undergone many changes since it portrayed it alone, other symbols of neighboring countries. For example, the Czech lion with two tails; Slavonia characters: line, star, and marten; Polish eagle; Croatian red and white "checkered", an eagle with a crescent of Silesia; Lions head three crowns from Dalmatia; Numerous posters Transylvania (sun, moon, half eagle and 7 towers), as well as the Lion of Luxembourg.
The use of this flag was againconfirmed January 1, 2012. Interesting is also the fact that the official version of the government and the state flag consists only of the three color bands, but there is also an unofficial government flag, which is placed in the middle of the country's coat of arms.

Christmas in Norway, traditions, photo. As the ...

What to buy in Tallinn. What to bring out ...