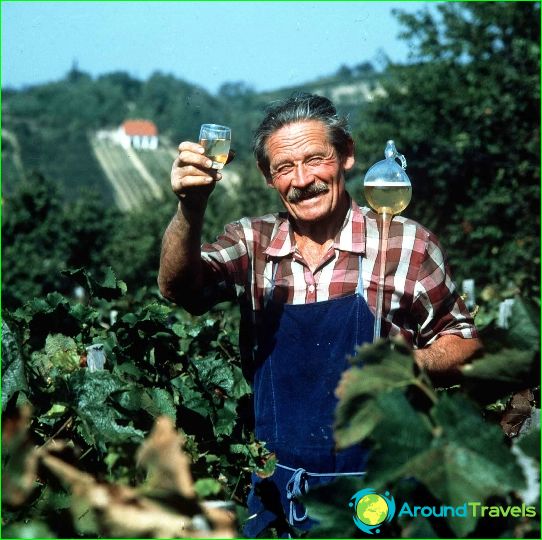 Even people far from the wine at least once in a lifetimeI heard of Tokay wine, which is the birthplace of the region Tokaj hills in Hungary. This area is so unique, and the wine produced here in Hungary - ideal and famous that UNESCO had to make the region in the World Heritage List. Tokay of Hungary - a true "liquid gold." White dessert beverages differ special raisin flavor and bouquet of honey tones.

Winemaking in Hungary, according to historians andarchaeologists celebrated no less than two and a half millennia. It appeared during the reign of the Celts, which were replaced by the Romans in the wine field. Wars and plagues of pests treated cruelly with plantations of grapes, but wine in Hungary did not cease to produce, in spite of any obstacles.
There are more than two dozenthe main wine-growing regions, which are indicated on the labels of wines of Hungary. The vineyards are located on the hill and in the Balaton Shomlo area on the foothills of the Bükk and in Villani.

You've heard of the Furmint?

One of the most important grape varieties in HungaryIt called Furmint. It is grown in more than half the total area of ​​the country cast the vine. Most high-quality dry wine and Tokaj Hungary blended based on the Furmint variety of fruits.
Vine Furmint capricious and unstable to frost,but it gives such fragrant berries, that all the efforts to pay off her growing handsomely. Special sugar Furmint fruit uvyalivat allows them to obtain high-quality dessert wine Tokay.
No less popular in Hungary and grapeHarslevelu, occupying a third of the plantations. It is grown for the production of a light dry wine, a distinctive feature of which - barely perceptible floral notes of the bouquet.

For Hungarian wines make their own national classification. Each wine can be classified to one of the classes, and all the information about its status can be read on the label:

Hungarian wines - a great souvenir and gift for friends and loved ones. Gastronomic and wine tours in the country have become increasingly popular with tourists from Europe and Russia.