Home>Articles on India>Airport Bangalore: diagram photo. How to get to Bangalore Airport

Airport Bangalore: diagram photo. How to get to Bangalore Airport

Articles on India
by Nori 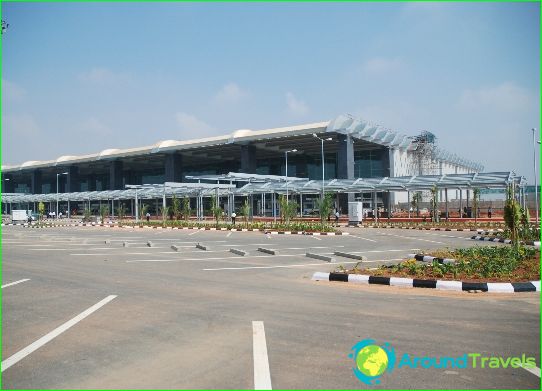 Indian Bangalore Airport isabout 30 kilometers from the city of the same name, in the town of Devanahalli. The airport covers an area of ​​over 16 square kilometers. He is very young, the first flights here began only in May 2008.

They planned to build another airport in the middle of90s, but construction began only in 2005. The opening was held in March 2008, but the deadline commissioning detained for 2 months due to problems with air traffic.
According to initial plans, the maximum throughputability should be only 3.5 million passengers a year. However, this figure was soon revised, it was decided to provide the capacity to 12 million passengers. Also, the entire infrastructure plans have been revised - passenger terminals, runways, etc.
According to the plan, in the construction of the airport was to the discovery of its own railway station.

Airport in Bangalore currently has onerunway, its length is nearly 5 kilometers. This runway is able to receive all types of aircraft. In the near future we plan to open a second runway, which will increase the airport's capacity to 18 million passengers a year.
The only airport terminal covers an area ofmore than 70 thousand square meters. Here you can find all the necessary services on the road - cafes and restaurants, ATMs, luggage storage, Internet, etc.
The terminal has 8 boarding bridges from 20 departure gates. Also, there are 19 remote sites to which passengers dovozyat bus.
Also, the airport is ready to offer its guests a spacious parking for 2000 parking spaces.

Not far from the airport is a five-star hotel that has 321 rooms.

From Bangalore Airport can be reached in several ways. Regularly sent from the terminal building several shuttle buses, following in various parts of the city.
Also, to the city, for a higher fee, you can get a taxi.

Airport in Tunisia: a diagram photo. How to get ...

Airport Tivat: diagram photo. How to get ...