Articles about Goa
by Anna 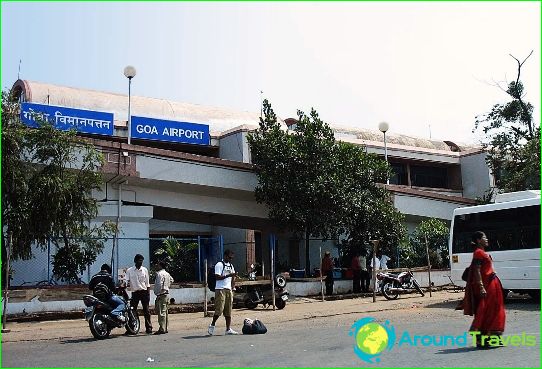 Home Goa airport, located 30 kilometers from Panaji - the state capital, near the city of Vasco da Gama, in the vicinity of the village of Dabolim. Its area is more than a hundred hectares.
On average, the Goa airport able to serve moretwo hundred thousand passengers arriving into the territory of India, and take approximately seven hundred international flights per year. And this is - 90% of the total number of charter flights to the country.

The airport was built in the mid 50-ies of the last century, the colonial government of Portugal, mainly to serve local airlines TAIP.
Since 1961, the airport has repeatedlyIt was bombed by the air force of India, and by the end of the same year, as a result of the action of the liberation of the Indian Air Force "Operation Vijay", finally went to the Indian government's hands.
Today it is the only airport in Goa, consisting of two terminals, one of which was given the status of international.

Tridtsatigradusnuyu heat and incredibly largethe number of companies offering services, porters, taxi drivers and rickshaws. For them, a matter of honor - to find a rich tourist and promote it in full. And the main task now - do not get them on the hook.
That is why it is best to get from the airport to your destination on the local bus. The stop is across the road on the left thirty meters from the exit of the airport.
Alternatively, you can take the "prepaid" taxi stand which - on the left at the exit of the terminal.
It should be borne in mind that the fares are somewhat overstated. However, access to nearby hotels in North Goa is a 15 - $ 20. The journey time by car from Panaji 30-40 minutes.
Flight from Goa to Delhi, Banglador, Mumbai andother Indian state capitals as well as in the major tourist centers such as Agra, Jaipur, Skin, takes from one hour to three and a half hours, the cost of $ 100 or more, depending on the distance and flight time.
Inside the airport, as elsewhere, there are - souvenir larechki, ATMs, grocery stores and small cafes. Equipped with ramps.
The airport has a money exchange, but the exchange rate is not the best, so it is recommended to use its services only in extreme cases
As a disadvantage to be noted that in the drive very hot, it is practically not ventilated toilets and toilet paper is absent.

What to bring to Egypt. What kind of things and ...

Shopping in Singapore. Shopping centers and markets in ...