Articles about Goa
by Nori 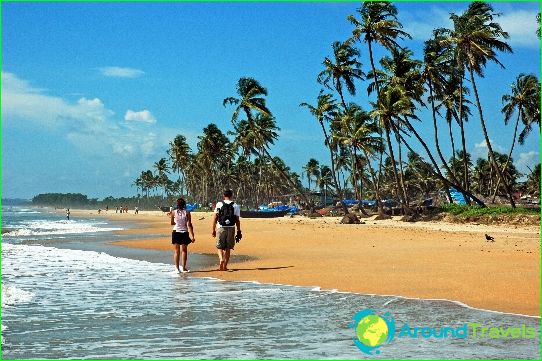 It is noteworthy that all the beaches of Goa takensplit into at least two parts, north and south. In general, Goa is about 40 beaches, which can be classified according to the vacationer expectations and limitations of his personal budget. In any case, rest on Goa requires vacationers following:

Goa beaches are considered very prestigious venue forsummer holiday, if only because that the average worker can afford something like this only once in several years. Rest in Sochi and the Crimea will be much cheaper, but the experience, of course, always be very different.

It is believed that the beaches in this part of Goacost travelers more expensive than all the others, because a local holiday is considered very prestigious. The best sandy beaches of Goa are located precisely in its southern part. The most expensive beaches are considered "Candolim", "Morjim", "Cooking" and "Cavelossim."

"Cooking" and "Cavelossim" stretch for 10 km, andIt is here that all of the most luxurious hotels in Goa. Corner, which form two of the beach, is almost the best in the whole territory of Goa.

The above-mentioned "Morjim" is sometimes called"Mini-Moscow", because it is here that a large number of Russian restaurants and cafes, and people speaking in Russian, found here is a snap. Menu of some restaurants is available to visitors in the Russian language version, and served and dumplings and soup. Whatever it was, the prices of local services is very noticeable.

Beach "Candolim" is no different in qualityservice to its southern "opponents". This sitting area is considered very respectable, and therefore suitable for a family vacation, and for relaxation in splendid isolation.

Other famous beaches of Goa

Beach "Calangute" was once the capital of the hippies. The representatives of this subculture rested here, festivals and just enjoyed life. Now the beach is open to ordinary tourists, but the spirit of freedom is felt in the same way as before. This beach will find interesting those vacationers who prefer to spend the evening is not reading books, and the dancing and singing favorite songs.
For those who also want to have fun as it should,but it does not have enough cash, suitable beach "Colva." Here vacationers will find a large number of very inexpensive restaurants and cafes where you can have a rest at least every night.
In Goa can find a place like the owner of any budget, but it is better to stock up in advance decent capital.