Articles on India
by Kristian 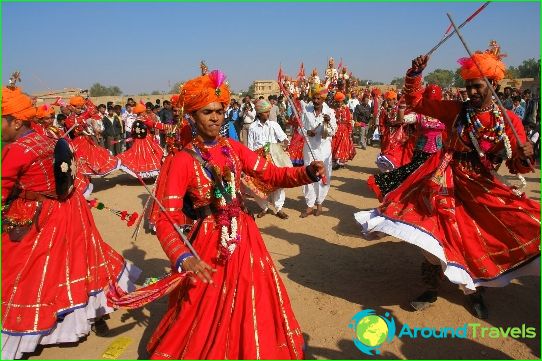 Despite the vast territory of the country,religious and ethnic diversity, and significant differences in the geographical latitude and climatic conditions, the culture of India is an indication that the state retains a unified national identity for centuries.

The main influence on the formation of Indian culturehave originated in its territory numerous religious movements. Adherents of Hinduism and Buddhism, Sikhism and Jainism have played a role in the occurrence of many crafts, arts and even culinary traditions. Festival celebrated in India - this national Republic Day and Independence Day, and our own in each state depending on the prevailing number of inhabitants practicing a particular religion.

Cuisine of India - one of the essential of its manifestationscultural traditions. The food here is varied, and the hostess uses a huge amount of ingredients in the cooking process. A special place is the milk from which the Indians can come up with hundreds of different sauces and individual dishes. Sugar and sweets - is another long story ready to tell each candy or cake.
Culture of India provides for the use ofnumerous cooking spices, many of which make dishes spicy and sharp. When ordering in the Indian restaurant the waiter should pay attention to personal preferences and to warn about the desired degree of severity of food.

Clothing in India - a colorful sari, bright shawlsnatural cashmere and silk, a lot of jewelry in the form of bracelets, necklaces and earrings. All this splendor is particularly beneficial emphasizes the beauty of the Indian woman during a performance of traditional dances. national dance art originated not less than two thousand years ago and, according to the Hindus, it is an expression of the divine in man and beauty. The dances contained elements of ancient myths and legends, and every gesture has a special role.
In today's culture of India no less importantplays and cinema, whose main themes - love and jealousy, the struggle for happiness, and the characters - rich and poor, but striving to be happy, regardless of caste and class prejudice. By the way, we were the forerunners of cinema theatrical tradition of India. One of the oldest areas in the world is a dramatic theatrical tradition Kudiyattam from Kerala, originated two thousand years ago.

Holidays in Mexico in October: prices and ...