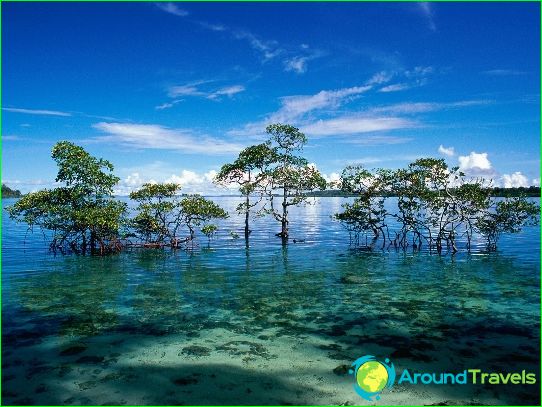 The Republic of India is located in South Asia. This is a huge state, which owns many islands in the Indian Ocean. Almost all of the major islands of India are self-governing territory. Coastline of the country stretches for 7517 km, about 2094 km of them belong Laccadive, Nicobar and Andaman Islands.

India's largest archipelago - and NicobarAndaman Islands are the single union territory. It is about 570 land plots, which are located near the east coast of the country, in the Bay of Bengal. In the Andaman Islands account for about 550 island formations.
The population is only on 38 islands. They are open to tourists. However, to visit the islands of the Indian foreigners must arrange special permission. Earlier, Andaman and Nicobar Islands were inhabited by tribes. Genetic and ethnic composition of these areas is considered to be unique. Aborigines used to communicate Andamanese languages, which can not be attributed to any language family. Residents spoke Nicobar Islands Nicobar languages. Each of the islands is the kingdom of the tropics. There are beaches with white sand, clear waters, coral reefs, and others. In tropical rain forests 83 species of reptiles were found and more than 58 species of mammals.
The most popular islands are Laccadives India. This group formed by coral land areas and amounts Union Territory of Lakshadweep. Laccadives Islands are located in the Arabian Sea, to the south of the Maldives. Tourists are allowed to visit only a tiny island Bangaram. You can also make a short visit to the uninhabited islands Thinnakara, p-1 and p-2.
Other major islands include IndianSalsett, Madzhuli, Diu, Sriharikota and Elephanta. The most populated island in the country is Salsett, whose area is 438 square meters. km. It is part of the city of Mumbai.

The climate of the country largely depends on the influence of the desertTar and the Himalayas. In India monsoons are often formed. But here it does not penetrate the cold winds from Central Asia, as a barrier to them are the Himalayas. In India, there are the following main types of climate: dry tropical and humid tropical, alpine and subtropical monsoon.

In the country there are three seasons:

Islands of India are located in the tropical zoneClimate. The maximum temperature is 31 degrees, while the minimum is 23 degrees. For the rest is more suitable from May to October. During the rainy season in the Andaman and Nicobar Islands is observed in November and December. In August and September there are storms, which cause numerous damage in coastal areas.

Holidays in Malaysia in March, prices and ...