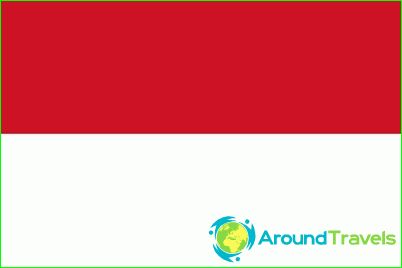 One of the essential character of the Republic of Indonesia is its national flag, adopted in 1945.

Description and proportions of the flag of Indonesia

Indonesia flag is a rectangle,divided horizontally into two equal halves. The upper part of the cloth - bright red, and the bottom - white. In proportion to the width of the flag refers to the length of 2: 3. State symbol of the country commonly called red-white flag or bicolor.
Gyuis or naval flag of the RepublicIndonesia used its warships. It comprises nine alternating bands of equal width, five of which - red, and four - white. Bands jack given the informal name of "fighting a snake."

The history of the flag of Indonesia

The history of the flag of Indonesia is of the XIV century,when on the territory of the modern country blossomed state of Majapahit. During its existence, Indonesia has become centralized and developed especially rapidly. Mighty kingdom maintained diplomatic and trade ties with its Asian neighbors and the city famous for its wealth and influence.
State Flag of Majapahit, calledcontemporaries Bendera Pusaka - flag relic - was taken as the basis of the state in August 1945, when Indonesia declared independence. It Bendera Pusaka was hoisted into the sky in front of the residence of the first Indonesian president Sukarno, who is revered today a national hero of the country. He not only founded the National Party, and became one of the founders of the Indonesian nationalism.
Sukarno personally sewed cloth new flag,which has since several years have raised over the palace of the first person of the country on the day of independence of Indonesia on August 17. Later curiosity was replaced by a copy, and the original place of honor in the National Museum. Naval flags of Indonesia - a copy of the jack, which floated on the sea power of Majapahit courts.
Flag of Indonesia is almost identicalflag of Monaco, which is why the European state even expressed formal protest. But a more ancient origin Indonesia flag was sufficient reason to reject the protest, and the panel continues to soar on the flagpoles of the country and its offices worldwide.