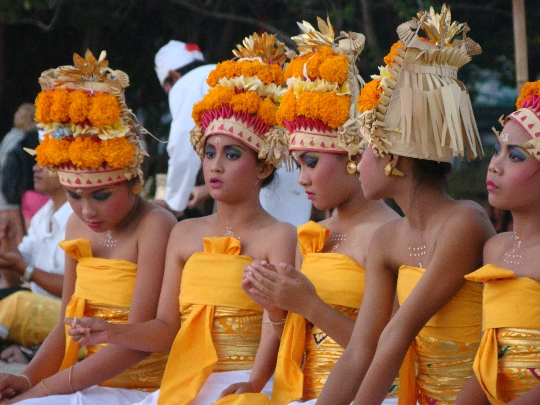 Multicultural country - it's about Indonesia. Here, in a colorful pot mixed dozens of nationalities and several religions, hundreds of customs and traditions, and because tours in this Asian state are now so popular. Familiarity with the traditions of Indonesia allows the traveler to know a world of varied and surprising discoveries that are so rich east.

One of Indonesia's most colorful traditions believeFeatures of the architecture, which is a style very different from the Asian mainland. Buddhist and Hindu temples are particularly complex and majestic, and religious complex Borobudur and all included in the UNESCO list of World Cultural Heritage.
Houses Indonesians themselves erected in variousstyles, but it is considered traditional light frame structure made of wood, whose roofs are covered with bamboo or reed huts or at all. Netherlands colonialists brought to the architectural traditions of Indonesia bit of European style, recognizable, especially in the architectural elements of the palaces of the local nobility.

The variety of cultures in Indonesia is reflected in thearts and crafts. Choosing gifts for gifts to friends and colleagues, it is worth paying attention to products popular on the islands of crafts:

What to buy in Dresden. What to bring out ...