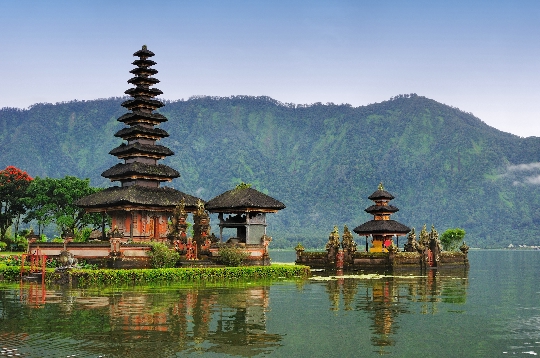 Indonesia - completely an island nation,located only 18 islands. For foreigners, Indonesia often - it's only Bali. But the other islands are no less interesting: Java offers ancient monuments, Komodo scare these "dragons" in Sumatra you will have the opportunity to "talk" with the orangutans. And, of course, on each of the islands have the opportunity to visit the volcano, if at the time of the visit, he will "sleep". That is a real trip to Indonesia.

Buses, which are used for long-distancetrips, quite comfortable and very strictly adhere to the declared schedule. Basically, the car service area of ​​the island. There are routes that include the ferry ride from island to island, but there are very few. Tickets are needed to fly the day before the trip. They can be purchased at the ticket office in the bus station or the bus company office.

Buses that go to cities in mosthis old and has long served their service life. However, they are always full. Payment for travel is transmitted either the conductor or the driver of the vehicle. Urban routes are very confusing and figure out where the last stop, and the bus was going very difficult. In addition, foreigners are often cheated, taking advantage of ignorance of the cost of travel. Besides bus you can ride the shuttle van. Locals call them "bemo".

If you will have a desire, you should usepedicab service. But on the fare you should always negotiate before landing. These cabs are very convenient if you need to get to a place completely unfamiliar to you.

Taxis are equipped with counters in the country, but veryit is important to ensure that after landing the driver is required to include it. We must also keep an eye on his testimony, because the attempts explicit data reduction, are not uncommon. If the taxi driver refused to turn on the meter, then you have every right to refuse of its services and take another car.

Ngurah Ray country's main airport is located in theDenpasar. It arrives here and the majority of tourists. Another international complex while the airport - Soekarno-Hatta Airport - is located north-west of the center of Jakarta.

Since Indonesia - an island nation, thethe most popular variant of travel in the country is air travel. domestic travel cost is relatively low. flight service and engaged in public and private companies. With tickets no problem, but you can order them through the Internet.

Train travel in the country there are only two islands: Sumatra and Java. The trip you can go in the cars of three classes: first, business and economy class.