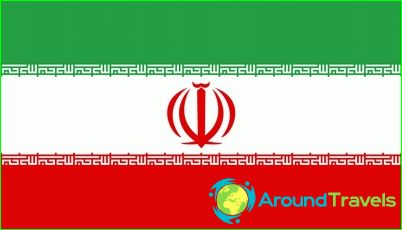 The flag of the Islamic Republic of Iran is aflag rectangular shape, the width to which the length ratio of 4: 7. Rectangle flag consists of three strips of equal width disposed horizontally. The lower band - red, and its color symbolizes the blood shed and the courage of Iranian soldiers in numerous battles, falls to their share. In the middle of the flag is a white band - the symbol of peace and order. At the top of the flag is green band, a symbol of the joy and fertility, youth and rebirth.

Once the three colors of the Iranian flagassociated with the three estates, on which the society was divided. Clergy preferred white, as the personification of the moral sanctity and purity of thought. Military wear red as a symbol of valor and self-sacrifice. Community members, farmers revered green, symbolizing for them the nature and prosperity.

Since the beginning of the last century, the Iranian tricolor wasdecorated with a lion holding a sword in his paws, and a symbol of Persia. The Islamic revolution in Iran, which began in 1978, has caused a lot of changes in the political system of the country. Together with the fall of the monarchy and the establishment of the new administration have changed and many state symbols. With Iran's flag was gone gold lion, but instead there was a stylized version of the word "Allah", made in the form of four crescents and a sword. Red and green stripes got the phrase "God is great", woven twenty-two times in the flag field. It symbolizes the date of the Islamic Revolution, which took place, according to the Iranian calendar, and the twenty-second day of the eleventh month.

The first Iranian tricolor was foundby archaeologists during excavations of Apadana palace in the ancient city of Persepolis. This palace was built in Vveke BC and is revered among the most interesting and important structures that distant era. The former capital of the Achaemenid holds many interesting finds, one of which - the standard red. Its perimeter was decorated with a border of triangles of green, white and red, and golden eagle was depicted in the center. The flag is exhibited today in the National History Museum of the country in Tehran, and the red, white and green colors for many hundreds of years symbolized in the Iranian-speaking peoples living in the Pamirs, prosperity, purity and prosperity.

Flag of the Solomon Islands: photo, history, meaning of colors ...