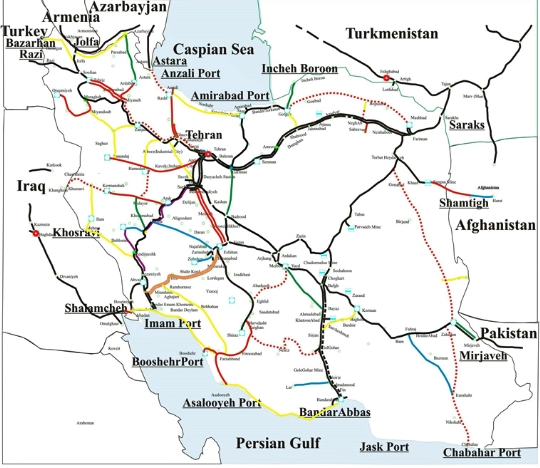 In Iran, the railway sector began to developsince 1914 First line Tabriz - Jolfa was built by specialists from Russia. Today, Iran's iron roads are branched chain. Its infrastructure is developing rapidly, despite the mountainous terrain of the country.

State of the railway system

Railroad length exceeds 10thousands of kilometers. The following routes are the longest:. Tehran - Bandar Khomeini, Qom - Zerenda, Isfakan - Shiraz and other electrified only a small part of the railways, however, diesel engines are mostly used for servicing trains. At present, there occurs a railway modernization system which includes laying new paths. Railroads Iran are widely used for transportation. F / d net in this country is perfect for transit of goods from various countries in Asia, Europe and the Persian Gulf. During the year the country's railways transported more than 2-3 mln. Tons of transit cargo. Passenger traffic occur on trains, which differ in the degree of comfort of cars. There are sleeping compartments 4 and 6 seats, seating comfortable seats and rigid seat.

Tickets for the Iranian trains are inexpensive. In Iran, the railway transport in great demand among the passengers. Demand for tickets often outstrips supply. For transportation operated locomotives started in Germany. Not long ago, the country began to produce its own diesel engines. The cars produced in the Iranian company "Pars Wagon". Railways of Iran since the beginning of state-owned "Iranian Railways." In recent years, this sector began to penetrate private enterprises. Today, most of the privatized freight cars, and almost half of the rolling stock from the scope of passenger transportation. The remaining wagons and locomotives are the property of the national company "Raja". The official website of the enterprise - www2.rajatrains.com.

Travel by train is cheap. Travel by train in many cases it is easier and faster than other modes of transport. For trips in the expression used various allowances. Train tickets can be purchased at any station. booking system in Iran is far from perfect, so sometimes there are plates with tickets going compositions. Passengers are available online flight reservation service. This can be done on site goiran.ru. Prices depend on the duration of the trip and the type of train. Booking can be any ticket using a credit card for payment.