The population of Iran 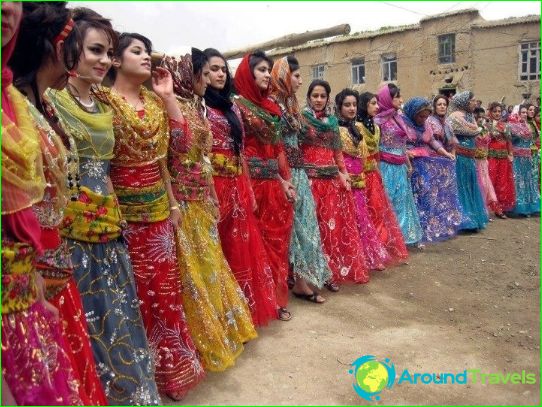 The population of Iran is more than 77 million people.

Persians constituting half of the total populationIran, live mainly in the central areas of the country, Azerbaijanis - the northern regions, the Kurds - in the provinces of Kermanshah and Kurdistan, Lurs and Bakhtiaris - in the south-western parts of the country, Tats, Talysh, gilyandy - on the south coast of the Caspian Sea. As for the peoples belonging to the Turkic group, they are Turkmens, who live in Khorasan and Mazandaran and Qashqais inhabiting Fars. In addition, Iran's Arabs live (their habitats - Khuzestan and the islands of the Persian Gulf), as well as Jews, Armenians and Assyrians (They live in cities, united in the community).

The vast majority of Iranians (98%) are Muslims (Shia, Sunni), others - Christianity, Judaism and Zoroastrianism.

Female population on average live to 72 and men - up to 69 years.

In recent years, Iran, due to significantfinancial investments in the health care system, managed to root out such dangerous diseases such as measles, polio, tuberculosis, diphtheria, tetanus and others. The country measures on environmental health have been taken - Today the population is provided with drinking water quality, and trained hygiene standards. Residents of Iran began to smoke less due to the anti-smoking, working at the national level (the number of smokers has decreased from 15% to 11%).

Another achievement of Iran - the presence of houseshealth, equipped with computers with Internet access (they are open in all locations). If you enroll in the health house need hospitalization in a larger medical Medical Center, then to forward it to the electronic medical record, allowing the doctor who will cure his new patient, learn the history of his illness.

The traditions and customs of the people of Iran

In Iran, men are allowed to have up to four wives, but,As a rule, they do not have more than one wife. And all because of a man under the law shall apply to each of his wives equally (this applies to the material, psychological and sexual aspects of life). In addition, if a woman in marriage stipulated that throughout her life, she is the only wife he can not for your spouse to violate this condition, as it shall be documented (unless, of course, he did not give up and will not break the wedding).

Wedding traditions of Iran interested in the fact that the groomI am obliged to present his future wife expensive gift in the form of a house, apartment or a decent amount of money in gold coins, and the bride to the groom - wedding suit or a ring.

If you are thinking in Iran, teach that in public places can neither smoke nor drink alcohol (you will be subject to prosecution by local law enforcement agencies).

Children's camps in Poland in the summer. Children's ...